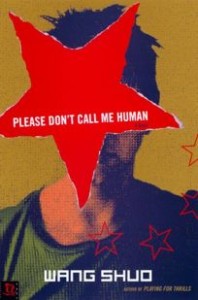 It’s not hard to tell from the cover that this book is going to be an unpalatable sort of satire. Whilst I find Wang Shuo very interesting as a writer, I found myself waiting for the suitable moment to start this book. When I finally did, the stark committee meeting scene it opens with put me off a couple of times. Having been exposed to the Chinese media in my childhood, there is something in the tone of official committee meetings that is inevitably soporific and dulling to one’s senses. It was not until the plot device of the Big Dream Boxer is revealed at the end of the first chapter, that I really started to engage with the story.

The Chinese Competition Committee, overseen by Zhao Hangyu, has failed to find the Big Dream Boxer, the national hero who would beat the brawny foreign contestant in the Free-Style Elimination Wrestling Competition, to win some face for the nation. As domestic contestants get crushed in the ring, budgets run deep into the dismal red and sponsors lose interest, the desperate committee changes its name to the more catchy MobCom, and the anxious Zhao, its chairman, tracks down Bai Du and her two henchmen, Liu Shuming and Sun Guoren, supposedly talent hunters for the Big Dream Boxer, giving them one last chance of success. On their way home from the train station, Bai and Liu run into pedicab driver Tang Yuanbao, who by chance displays what looks like a rare form of kungfu. Overjoyed, MobCom enlist Yuanbao into the Party and enroll him into the intense training programme supposedly designed to ready him for their plan to sabotage the enemy.

More demonstrations of Yuanbao’s martial arts feats at his home, and the discovery that his father Tang Guotao, 111 years of age, is a surviving rebel of the Boxer’s Rebellion, and the existence of a manual that bears the secret martial art techniques of the Boxers, fools the reader to think that the plot might be continuing to gather momentum. Very soon however, Tang Guotao gets questioned  about his life versus the official historical records, by an interrogator who resembles the worst kind of censor, twisting evidence around to fit a made-up viewpoint. And Yuanbao’s training quickly descends into total farce, as he is put through different tribulations that seem totally haphazard, only united by their capability to escalate the degrees of humiliation, from denouncement, to exorcising, to mutilation. I found myself abandoning all expectations, and carried along by this episodic satire on an entire society’s propaganda, rhetoric, its people’s raison d’etre and aspirations, learning not to take the author’s words at face value, as Tang Guotao proves invulnerable to bullets and Yuanbao flips over a tank after being run over by it.

Judging by the age of centenarian Tang Guotao, the story would be set around the 1990s, the television broadcasts certainly concurs with this. Yet the communications by telegram and the Gestapo-like uniform of MobCom seem to suggest references to early twentieth century periods, so does the translated language style, which falls somewhere between carefully crafted Chinglish and hammy faux-newsreel gags. When I got used to its awkwardness, it does help to carry the novel’s shocking and incisive dark humour, by bringing out the caricature-like element of the dialogues. Parts of it really did have me in fits of laughter. Although set in different times and even on different planets, the feel of the story is very reminiscent of Lao She’s “Cat Country”, another satire about a degenerate society on Mars that spins more and more out of control, with very little of the transcendence or resolution that one might expect as an ending from dystopias such as these.

This is a very dark and unusual work, nevertheless in the vein of a healthy tradition of Chinese satire such as Lu Xun’s “True Story of Ah Q”, with a brilliance of daring word buns and sardonic humour added to the mix. I would recommend only reading it when you are in a light-hearted mood. As an encouragement though, I leave you with a hilarious extract from the banquet, to which Yuanbao is take, for an education in traditional culture.

The diners’ eyes nearly popped out of their heads, as the fat manager stood up lethargically and described for the honored guests the name and unique qualities of each dish…….

“The core of this dish is three walnuts and a meatball. It’s called ‘When three men walk along, one of them is my teacher.’ The meatball is called a lion’s head.”

“This one has potatoes cooked with thirty-six spices. Its name is ‘Only books bring knowledge, all else is inferior’ ”.

“This one is a thick soup consisting of a small hen, a large rooster, a small rooster and a male crab. Its name is ‘At home obey your father, after marriage obey your husband, after your husband dies, obey your son’. ”

“Next comes a simple dish – boiled eggs. Since there’s no way of telling whether they are male or female, we call it “Seek not accomplishments, but avoid mistakes.’ ”

“The next dish is steamed bear’s paw and fish. When it’s done, the bear’s paw is removed, leaving only the fish, and is called ‘Bear’s paw or fish, one or the other.’ ”

“This next one is stewed pork loin, with all the meat removed from the bone. Its name is ‘The weak can travel the earth, the strong can hardly take a step.’ “

“Here we have fried lizard and earthworms, which is called ‘Face the strange with no fears, and its fearfulness disappears.’ “

“This is a whole roasted pig, prettied up by the chef to give it a determined, peaceful expression, and to carry the meaning, ‘Dying in glory is worse than living in ignominy’. ”

“Well, what do you think?” Bai Du asked Yuanbao.

“Quite an education,” Yuanbao blurted out as he emerged from his astonishment.

“This is just the beginning. You must learn – much, much more”.