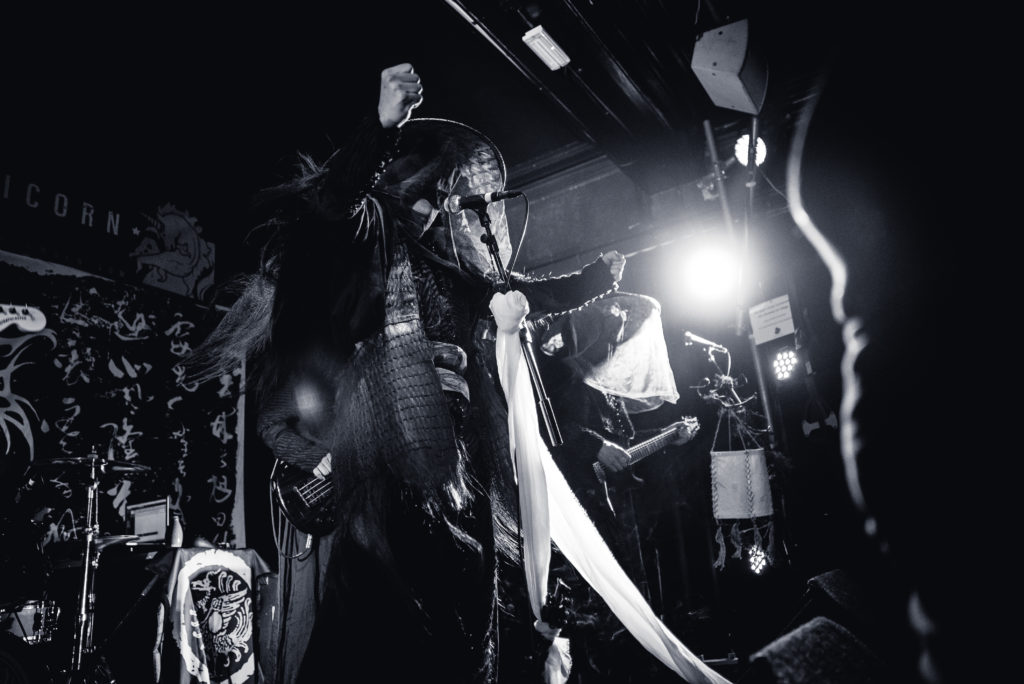 In Chinese culture, there are traditionally five elements, which more or less match up with the West’s four, with the addition, of Metal. Having explored the underground music scene in China, DJ’ing at Beijing’s infamous Bar 13, there was no way I was going to miss the Shangdong black metal band Zuriaake’s first European tour, especially when they were playing the Camden Underworld. 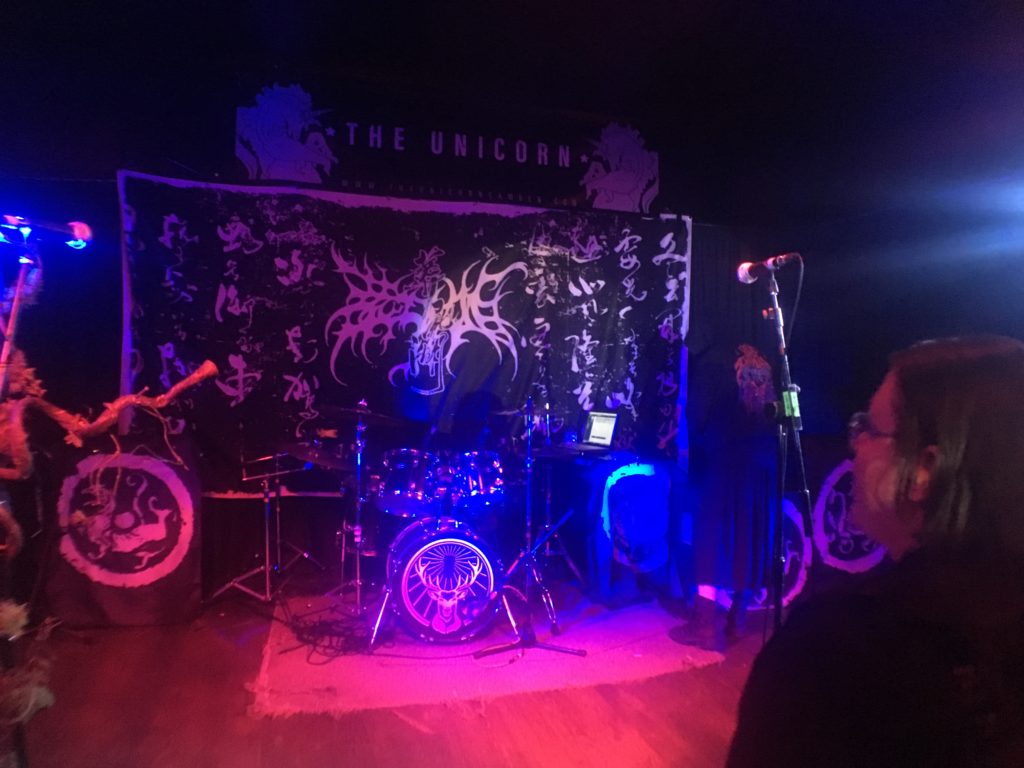 The Hu, who were promoted by LiveNation at the beginning of the month, sold out at the great rock venue, and they must have expected great things from this act, but as the time grew near, and ticket sales were less than stunning, The whole show was shifted just under a mile down the road to a flat-roof pub called “The Unicorn”. It must have been galling to the band to be downgraded from “Heart of Alt London” to “the pub your mate’s band plays in”, but they handled it magnificently. After a little problem on the door (where the name on the guest list had become a hodgepodge of my Chinese and English names), we started to look around at actually whom the gig HAD attracted.

Walking in during the first warm up act, there were maybe four or five Asian faces dotted amongst the fifty attendees. I have to say, this was not a great turnout. The venue itself is a nice little bar, if you like the mix of dilapidation and anarchy, where the sound guy is more concerned with stopping speakers blowing rather than getting a perfect mix, which, considering the 12-minute prog rock Warcraft tracks issuing from the warm up act, was no mean feat. The crew did a good job of setting up each band’s tech, and changed between the warm-up acts in good time, but when it was time to prep for Zuuriake, things took an interesting turn.

A flurry of bandit-masked men (possibly the band, still maintaining their anonymity, dressed the set, winding vines around the mic stands, draping monochrome banners over any cases and monitors, and turning the stage into a grotto. Just because they’d been downgraded, did not mean they were going to put on any less of a show.

The lights were lowered, the crowds were parted, and the band made their way onto the stage. 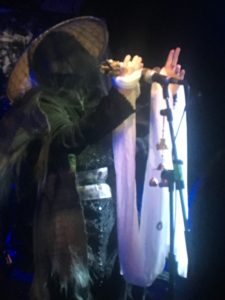 Zurikaake’s stage presence is as much about theatre and visuals as it is about the sound. Whilst I’m sure they’d argue that being fully covered from head to toe allows the audience to simply enjoy their music, their stage persona are full-on Chinese gothic.

Each dressed head to toe in black embroidered Hanfu, and black, netted Dou Li bamboo hats (except the drummer, who would have found it impossible to wear and maintain his vicious assault on the drums), they arrive on stage like a temple parade, carrying rough-framed cloth lanterns, and forgoing the smoke machine for a swinging thurible.

By this time the crowd had also swelled to just over a hundred, with the Chinese contingent making up a good 10-15%. Still mainly looking like they’d slipped away from dinner with the family, but a devout handful of real sino metal heads, ranging from petite gothic dolls to your Mongolian warrior type in a cut-off denim jacket.

Zuriaake are one of China’s longest standing stalwarts of black metal. While some bands from China seem to aim for a “global” alternative sound, singing in English, these masked musicians are refreshingly proud of their heritage. Their stage banners depict cardinal guardian spirits (the dragon, the phoenix, the tiger, and the turtle, though here necessarily joined by the venue unicorn, and the Jägermeister stag on the house kick drum); and their singer, Bloodfire, screeches in Mandarin, which, to a native speaker, conveys ties to mythology and a tradition of ghost stories, but to a Western audience, is a rich texture of distortion, counterbalancing the throbbing, ringing bass and rhythm guitars.

There is definitely an evocation of the Yi Jing, a kind of mood or inner mental landscape one would usually equate with ancient musicians, classical poets and landscape painters, though not always a peaceful one. 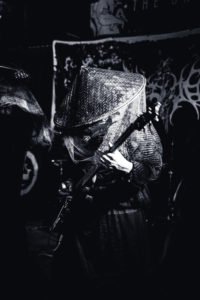 After a melodious intro, drawing on birdsong and murmuring brooks, like the calm before the storm, the low and aggressive base starts, followed by a drum line that accentuates the guitars rather than driving everything on. Apart from the more obvious elements, such sampled bells, chanting, the use of temple blocks and the Xun (Chinese ocarina), the more melodic lead guitar channels some very traditional rhythms and techniques, demonstrating how you could create an Eastern sound with an electric guitar without resorting to the glib pentatonic commonplaces.

The whole scene is far more a theatrical display than a concert, with physical theatre making amends for covered faces. The ghoulish shrieking definitely harks at China’s centuries-old horror tradition of spirits, rather than physical creatures (inspiring the growling Swedes you’d normally associate with the genre). It’s cultish. It’s a magic show. Bloodfire wields a carved wooden dagger, raise a pottery wine jar and other rustic props, making offerings to mountain gods and conjuring restless spirits and thousand-year-old curses with the lyrics.

On a sweltering night, in a venue with no air con, I was incredibly impressed that the band gave such a seamless performance, buried under layers of costume, and never breaking character. Considering they are used to performing in vast arenas in China, the last-minute change of venue must have been a blow, though they never showed it.

This brings me to an issue that makes me angry enough to personally pen a black metal track. Despite the making of some documentaries, tentative US and European tours organized by some better known labels such as Maybe Mars, Chinese alternative music is still relatively unknown in the West. Apart from an obligatory announcement in late July on the website and Facebook page of their Chinese label Pest Productions (who’ve not touched their Twitter since 2017), Zuriaake got a total of one line on the venue website. Like fellow East-Asian band The Hu, they were booked only for one night in London, on a dismal Tuesday. But at least The Hu had the power of one of the UK’s biggest promoters behind them. 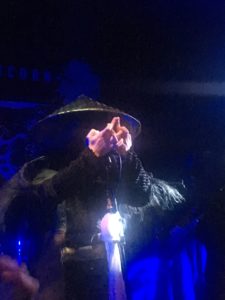 Seriously, the aesthetics of this band, their raw energy, fantastic stagecraft, and the incorporation of Chinese culture should have been a big draw, if promoted properly. It was upsetting to see such a small gathering, but I have to admit, it was almost by chance that I discovered they were playing at all.

Chinese stars do come to the UK, but on the whole, they come FOR the existing Chinese fans. Superstars Jolin Tsai and the boy band Mayday have both played Wembley Arena, though if you don’t speak Chinese, you may have been totally unaware of this, as almost their entire advertising campaign was printed in Chinese, even if the space booked was in national newspapers.

But.. there is not really a platform for China’s counterculture overseas.

Painkiller (China’s premier rock magazine), is interested in Western bands coming into China, and occasionally new bands emerging, but getting a physical copy over here is a nightmare, even those few speciality stores where you can grab a China Daily, or the latest Manhua, look at you askance if you ask for重型音乐. Maybe it isn’t their job anyway.

Maybe it’s metal music mags like Kerrang that should be keeping an eye out for interesting new bands (searching Zuriaake on their website elicits zero results). Maybe a Western audience just has no interest in a metal band singing in a language they don’t understand, about a culture they aren’t part of.

Cue Laura. By no means the only white face at The Unicorn, but certainly the only one to have pushed herself to the very front of the crowd. A dedicated Norwegian metal fan surrounded by a sea of East-Asian headbangers. Hailing from the land of giants, Vikings and corpse paint, she told me that Zuriaake is something totally different from other black metal. “It’s new and exciting and it’s like finding metal all over again”. Immediately falling in love with the band, she’d bought the T shirt and back catalogue from the merch stand, plans to catch them again.

For a band from China to chance their arm on a European tour involves stretching their budgets to perform, a myriad of red tape to be overcome. Yes, it does cost distributors and venues to invite them over, but surely in an industry that craves the new, their unique sounds deserve better than to be confined to the off-peak nights and given a one line write-up in the About section. It is a huge deal when English-language bands tour other parts of the world, why should foreign bands not receive the same courtesy back?

Due to its tumultuous 20thcentury history, a lot of China’s pop culture and sub-cultural genres seem to have been imported wholesale from foreign traditions, and it often does not develop much past imitation. But Metal in China has found its own local history to invoke. Enslaved and Ásmergin may see themselves as modern Vikings, China’s own ancient warrior aesthetics have been adopted by Jin Shu (Chinese for metal) pioneers in the late 1980s such as Tang Dynasty. A style that, as the band lead Kaiser Kuo has pointed out, really suits Chinese guys.

As a band still going after almost twenty years, even surviving a short hiatus, Zuriaake are certainly dedicated metal warriors, who really just need to find some decent arenas. The tour manager tells me they are newly signed with some European labels, who will re-release their existing repertoire and the two-year long visa to the UK is really encouraging them to travel. Hopefully this will mean longer tours with more dates in each venue, and better accessibility of their music. I’d love to see Zuriaake take to the stage at some UK festivals, and really let loose on the audience! 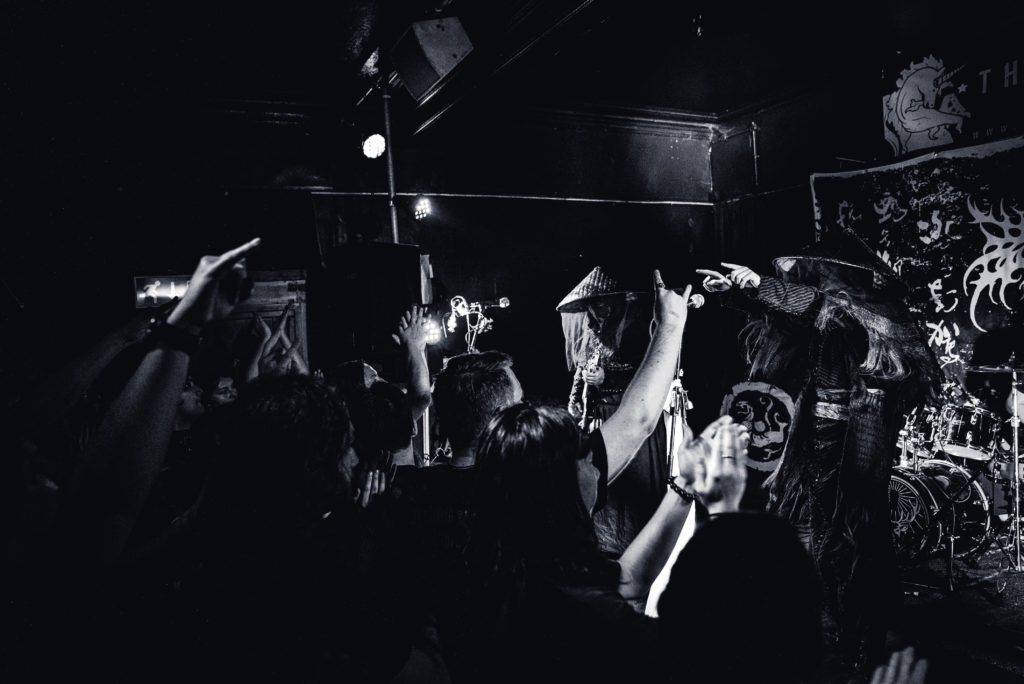