26th May, 2019 Some Thoughts on The Wandering Earth 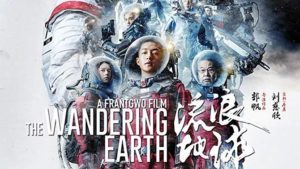 Hope you’ve all had a chance to watch The Wandering Earth by now. (If you haven’t, its on Netflix, and iQiyi). I’m ready to share my thoughts on it.

Did Wandering Earth live up to all the hype? I think it did! It was an excellent hard sci-fi movie. With very high production values, including the CG, a gripping but logically grounded plot line, which, whilst comparable to some of Hollywood’s disasterporn sci-fi, never loses its very Chinese heart.

Beijing-produced and Qingdao filmed, we have a big (ish) budget extravaganza where plots of epic magnitude, rest on the shoulders of a few imperfect individuals. Just the kind of story that Liu Cixin excels in.

The Wandering Earth goes to show that some things in China never (or will never) change, even when populations have moved underground and the planet itself is advancing towards another solar system. We still see school classes learning poetry by rote, and they are still listening to Li Huan Zhi at New year!

In a film that is so much about the fate of humanity and the greater good, there is surprising focus on personal histories and emotions of the protagonists, with civilian survivalism clashing with authoritative pressure, and characters that have to act for an intangible Big Purpose whilst still caring for their friends and family. Like most typical Chinese stoies, there’s lots of self sacrifice, and a lot of deaths, framed in poigniant moments of selflessness and duty.

Whilst The Wandering Earth finds a home among the modern wave of dystopian survival stories, it is ultimately a celebration of the triumph of human ingenuity and spirit of not only the small group of individuals at the story’s heart, but the united efforts of everyone striving towards a single goal (cue March of the Volunteers and a montage of factory workers and army privates).

Chinese science fiction is increasingly gaining global attention,  and whilst films like The Wandering Earth are getting the majority of press coverage, there is still a trove of films, books, and series out there. Here are five other films from China’s science fiction tradition, that deserve some renewed attention. If Wandering Earth does well, maybe Netflix can be convinced to bring some of these over too!