7th Jul, 2021 Space Myths Part I: How China is Taking its Mythos to the Stars 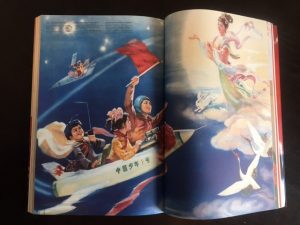 China is currently well into its age of space exploration. With the launch and landing of its Mars exploration programme Tienwen1 earlier in the year, and the docking of its first manned spacecraft, the Shenzhou12, this new frontier is at not only the forefront of China’s consciousness, but the world’s. A glance at the names of China’s space projects, and you’ll see that rather than paying tribute to the proletariat struggle, as programs did in the 1960s and 1970s, the country is now invoking its ancient scholars and scientists who mapped out the stars, and its mystical beings whom they thought lived in the skies. In part one of this series, I look at China’s manned space programme, space station and lunar exploration programme.

The Chinese National Manned Space Programme, or project 921, began in 1968, and was named the Shenzhou after its successful test launch in 1999. Shenzhou5 achieved China’s first crewed orbital flight in 2003, and since then, Shenzhous6 to 11 have successfully completed multiple crewed missions that included the first Chinese spacewalk, first female taikonaut sent into space, and several dockings with the Tiangong space laboratories (see below). Earlier this year, in June, the Shenzhou12, carrying a crew of three, docked with the Tianhe space module. As the third in 11 launches for the construction of the three-module station, the three experienced taikonauts will spend three months in space, testing equipment and systems, surpassing the record set by Shenzhou11’s crew 33 days.

神舟, Shenzhou, meaning divine ark, is a homophone of 神州, the mystic land, or the land of the gods, an archaic term used to refer to the land inhabited by Han Chinese people. In mythology, it is the land ruled over by the legendary emperor Huangdi, after he united the tribes. Even today, “Shenzhou” is widely used in the media, arts and education as an instantly recognizable term to the Chinese that evokes the land of their illustrious civilization.

If we’re talking mythological names, then there’s bound to be a dragon involved somewhere, and the Shenlong 神龙, is the experimental reusable space vehicle, which launched from the Jiuquan facilities in 2020. A variant of the Shenzhou, the aptly named “divine dragon”, is designed to be enduring, as the dragon has been, a Han totem, and mystical symbol of China for centuries.

Launched in 2011, the Tiangong-1 is a single module space laboratory and station run by the China National Space Administration (CNSA) with the primary goal of practicing spacecraft docking, in preparation for future exploration of the solar system. Tiangong-2 launched in 2016, and between them, they have completed multiple docking missions with various models of the Shenzhou and Tianzhou-1, a cargo and refuelling craft. Tianzhou-2 docked with the Tianhe module in May 2021 to deliver propellant and supplies for the Shenzhou12 crewed mission (above). Data from the Tiangong-1 has also helped in China’s mineral discoveries, forest and ocean monitoring, and flood control.

Tiangong, 天宫, means Heavenly Palace, which the ancient Chinese imagined were celestial abodes of the gods. In the Chinese mythos, the universe is formed of three realms, Mojie, the realm of the demons, Fanjie, the realm of the mortals, and Shenjie, the realm of the immortals. Thousands of immortals, high immortals, gods and high gods, live in a nine-tiered realm in the skies called Jiutian, whence the supreme gods govern the affairs of all three realms. Today, even though stark constructions of assembled circuitry, computers and titanium alloys are sent into space, the Chinese still attach to them the same sense of awe; taikonauts such as Yang Liwei and Liu Yang are immortalized in the history of Chinese civilistation, by their journeys to the skies and their sojourn in the modern incarnation of the heavenly palace, these celestial experimental modules.

April this year saw the Tianhe module launching from Wenchang on the Longmarch 5B (affectionately referred to as Pangwu, or the “Chunky5”). With a name meaning “harmony in the heavens”, Tianhe is the core module around which the Tiangong Space Station, scheduled for completion in 2022, will be formed, along with the two laboratories. Considering the station will now share residence with so many immortals, harmony is the perfect thing to wish for.

The Lady on the Moon and Her Jade Rabbit

After a thirty-year delay, China finally launched CLEP, its lunar space programme, in 2007. Its series of three probes have so far completed 3D mapping of the entire lunar surface, Earth-moon transfer orbit, and the first lunar soft-landing since 1976, completing a patrol survey and successful return. The rover that landed with the third probe in 2013, stayed in operation for a record-breaking length of time. In 2018, the Chang’E4 carried out the previously unprecedented mission of exploring the far side of the moon, and in December 2020, Chang’E5 returned the first samples from the moon since the Soviet’s Luna24 mission in 1976. These relatively later lunar samples will help scientists understand what has been happening on the moon during the time when multicellular organism appeared on Earth.

Due to China’s peculiar history, its people did not live through the first moon landing in 1969 with the joy and anticipation that the rest of the world shared, and were not part of that universal experience.

For centuries however, the Chinese have gazed up at the celestial orb and imagined spirits living there. The oldest of these being a toad and a rabbit; and the most famous, being Chang’E, Lady of the Moon, whose image, along with that of the Jade Rabbit, still fill the media and adorn cakes on China’s Mid-Autumn Festival every year.

Chang’E was once a goddess banished from the heavens along with her husband Houyi, the legendary archer, who shot nine out of ten of the sons of the most powerful deity of the heavens, Dijun, to save the mortal world from being scorched by their powers. In one way or another,  Chang’E’s story ends with her ascending to the moon, after swallowing the elixirs of immortality granted to them by Xiwangmu, the Supreme Goddess. Different eras in history have woven in conflicting strands of the Chang’E myth, but she lives on in the Chinese psyche as a symbol of human endeavours to reach for the skies, a spirit encapsulated in China’s naming of its lunar probes the Chang’E. One of the many origins of moon cakes was that they are offerings Houyi makes to his wife on Mid-Autumn night, when the full moon shines brightest in the year and he could see her most clearly.

The probe’s rover could have no other name than Yutu (Jade Rabbit), her faithful companion. As one of China’s many lunar spirits who evolved alongside each other, Yutu gradually came into being, replacing the toad, who is assigned the eternal task of pounding elixirs on the moon, during those historical times when Chang’E was viewed with more sympathy, and given a companion in her eternal doom.

Also in 2018, China launched the Queqiao, a relay satellite to prepare for the moon expedition of Chang’E 4. The Queqiao, 鹊桥 or Magpie Bridge, draws from the legends of another iconic couple of mythology, Niulang and Zhinü, the Cowherd and the Weaver, a story that partially evolved out of the ancient fascination with the Space. What the ancient Chinese referred to as the Cowherd, is now known as Altair, the brightest star in the Aquila Constellation, and what they referred to as the Weaver, is now known as Vega, the brightest star in the Lyra Constellation. They observed that these two stars moved very close together on the 7th day of the 7th lunar month. In time, a beautiful legend came into being.

A popular version of the legend states that once upon a time, a cowherd saw a goddess while she was bathing, and the two fell in love. She decided to settle on earth with him, and as he ploughed the fields, she wove cloth and they lived happily with their two children. Eventually, it came to light that she was the seventh daughter of the Jade Emperor, ruler of Heaven, and the Supreme Goddess Xiwangmu. Her involvement with a mortal angered the gods, who recalled her immediately and forbad her from seeing the cowherd again. Xiwangmu took pity on her youngest daughter and permitted her to see her husband once a year. So every year, on the seventh day of the seventh lunar month, sympathetic magpies flew together to form a bridge linking the eastern and western galaxies, so that the lovers can reunite across the stars.

The tradition of celebrating Qi Xi, the “Chinese Valentine’s Day” and Qi Qiao, the Festival of Skills, in honour of the goddess’ trade on earth, have recently been revived in China. Today the Queqiao not only acts as a bridge between contemporary China and its traditions, but also between humanity and the mysterious far side of the moon.

In part II, I explore the connections between the Chinese fire deity, patron god of scholars, a certain monkey spirit, and Space.

Featured image is a photo taken of “Soar, youth of the New China” by Jin Dingsheng (Qingjiang Art and Leisure Centre, Jiangsu People’s Publishing House, 1978); from an owned copy of Chinese Propaganda Posters From the Collection of Michael Wolf, Taschen, 2008. This article has been written with thanks to The Planetary Society.