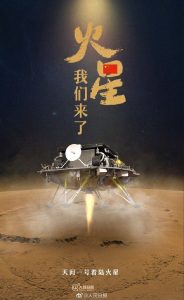 China is currently well into its age of space exploration. With the launch and landing of its Mars exploration programme Tienwen1 earlier in the year, and the docking of its first manned spacecraft, the Shenzhou12, this new frontier is at not only the forefront of China’s consciousness, but the world’s. A glance at the names of China’s space projects, and you’ll see that rather than paying tribute to the proletariat struggle, as programs did in the 1960s and 1970s, the country is now invoking its ancient scholars and scientists who mapped out the stars, and its mystical beings whom they thought lived in the skies. In the second part of this two-parter, I look at China’s Mars program, latest satellite launch facilities and Dark Matter exploration.

The God of Fire

In July 2020, overcoming the challenges posed by COVID_19, the CNSA launched Tienwen1, its Mars exploration programme, named after a poem by Qu Yuan. “Asking Questions of Heaven”, is probably the most well known poem composed by the celebrated ancient scholar of Chu, whose death is marked by the Dragon boat festival.

Tienwen1 successfully landed on the red planet in May this year, deploying its rover, Zhurong. The Zhurong’s main mission will be to studying Mar’s climate, geology, underground structuring and relaying the data to Earth, which includes continuing the global mission to find water and therefore existing life forms on the planet.

With twin origins as the descendent of Huangdi (see above), or his brother Yandi, the Flame Emperor, Zhurong has a human face, a beast’s body, and rides two dragons, symbolising his great might. He has been venerated in southern China as the god of fire and his name has become synonymous with that element in some literature. There isn’t a more apt name for the rover that explores Huoxing, or ‘fire star”, the Chinese name for Mars. Zhurong still occupies a space in the contemporary Chinese consciousness, recently appearing in the Enlight Media donghua Big Fish and Begonia.

The God of Scholarly Success

The launch centre is named not after a location, but after Lord Wenchang, the Chinese god of scholarly success, whose life, interestingly, also began in the stars. “The Wenchang Stars” is the name given by the ancient Chinese to a constellation adjacent to the North Star. Veneration of this deity developed through the centuries from local earth god worship, to eventually become nationwide, gaining endorsement even from the emperor himself.

Today, temples still fill with offerings from students of all ages and anyone wishing to succeed in the world, with a range of services and merchandise supporting several other industries. The huge abundance of faith across China in Lord Wenchang has propelled this mammoth deity into the 21st century, to watch over scientists and explorers, the scholars of space, on their most challenging endeavours.

Wu Kong (To Understand the Void)

In 2015, China launched its first space observatory, the Dark Matter Particle Explorer (DAMPE), to help find the origins of dark matter, which could make up five-sixths of the universe. Capable of measuring up to 2 trillion electron volts of energy, the DAMPE is designed to detect the cosmic radiation and gamma rays which dark matter is believed to break down into.

The DAMPE is nicknamed the Wukong Satellite, after Sun Wukong, the powerful Monkey King, from the 16thcentury classic Journey to the West. Wukong is the name given to the Monkey King by his Daoist master, meaning “to understand the void”. Even in China’s space age, the country still calls upon on this timeless protector and guiding spirit to help it gain an understanding of the unknown — and fill the void in humanity’s knowledge.

The Monkey King is well-known for having infallible sight, eyes that allow him to see the true form of any of the hundreds of demons he takes on in order to protect his master on their quest for the holy scriptures. Centuries later, his spirit is now guiding the Chinese to dark matter in its true form.

This naming of the majority of its space programme after myths and legends is part of a national phenomenon, visible in the science and technological sector as well as the arts, to reach back into China’s heritage. The use of mythology and classical culture to adorn, anchor and connect visions and technological innovations that propel China into the future is not just a top-down directive, but comes from it’s people. The naming of the Mars rover was the result of a country-wide call-out for names. We only need to look at people’s suggestions to understand the significance of icons like Zhurong and Nezha, who still hold their place the Chinese psyche, a significance that is only increasing around the world.

Even during China last advancement into Space, during a period of history when religion was considered most ‘absent’, revolutionary Chinese artists had imagined workers being greeted with deities in the heavens. As with much of Chinese culture, the evolution is a messy, if unbroken continuation, with new developments building upon foundations of the previous, no matter how unrelated they might seem. The explorers, space station components of the latest missions are still transported by the Long March rockets, a programme that began as early as the 1970s and which put the first Chinese satellite into space, with a name is a fitting tribute to the struggles that came before.

I often find myself discussing with my editors, readers and audiences why I don’t capitalise “God”, and why I put it in plural form, in my writing. Chinese is a polytheist culture, and part of the naming of China’s space programme after figures from its mythos, will hopefully demonstrate that space isn’t solely occupied by Olympians. Perhaps one day, there’ll be Yaochi (Xiwangmu’s residence on Kunlun) alongside places like the Apollo Basin on the Moon, and Mount Buzhou alongside Mount Olympus on Mars.

To read more about the deities discussed, please check out my last book, From Kuan Yin to Chairman Mao: An Essential Guide to Chinese Deities.

This article has been written with thanks to The Planetary Society.