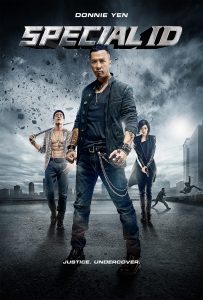 “Undercover cops walking a line between triad loyalty and law and order” is practically the bread and butter of the Hong Kong film industry, from classics like City On Fire, to its imitation in games like Sleeping Dogs.

Here, it is Chan Chi-Lung, played by Donnie Yen, who penetrates the echelons of Hong Kong’s gangster world, after severe reprimanding, as a last ditch attempt at returning to the force. His partner and boss, Captain Cheung (Ronald Cheung) promises to give Chan his “big break”, only after he has helped in solving one last case that would allow Cheung to retire in glory.

Of course, this “one last case”, would put Chan, and his family in the utmost danger, as old friends become new foes, and Chan battles his way out of the ruthless gangster circle, to save his mother, his dream and his job, with the aid of the mainland police force.

Among the film’s shining highlights is Chan’s mother Amy, played by Hee Ching Paw (the casting agency’s go-to actress for “troubled hero’s supportive mum”). Her mix of strength and vulnerability give Chan a rounded drive and goal without two much exposition, and their conversations bring the audience up to speed on his history, pretty quickly.  We find out that Chan’s missions have, more often then not, been complicated by his righteous spirit as he defends even the young gangsters in his undercover “big brother” capacity. Brief sepia flashbacks fill in details of Chan’s fall from grace, and his relationship with the major villain, Sunny (True Legend’s Andy On).

The film’s other key female character is the by-the-book mainland officer Fang Jing (played by Tian Jing in her first major film lead). Her androgynous demeanour allows the film to deftly skirt romance in favour of camaraderie, and Fang’s marksmanship, guts and home-soil advantage let her stand on equal footing with Chan, and besting him regularly.

Special ID is very much a traditional Chinese cops story, with an international approach to its look. Taking framing, and even key scenes from works as divergent as the anime Golgo 13, French action comedy Taxi, and even mirroring Bladerunner’s panning and neon lit cityscapes. Whilst Special ID is as deeply routed in its Asia-Noir style as any other film of the genre, director Clarence Fok Yiu-Leung, definitely gives his cops and gangsters story more of an artistic treatment. Rapid transitioning from Hong Kong as a dreamy metropolis, to lurid smokey Majhong parlours, heightens the secretive nature of Chan’s life.

True to its title, identity is the main focus of the film. Most obviously in Chan’s double life, and Amy’s idea of him, as a gangster kid who has done the shocking thing of joining the police, to more subtle questions of cultural belonging, which may be missed by the Western audience. The film is peppered with dialects, and from the opening scene, where gang leaders who have come to uneasy arrangements complain about new kids on the block infringing on their territories, they speak particular Cantonese dialects, indicating that they, the “home-grown”, are more entitled to the their operations. Sunny, the newcomer who turfs out the old gangs, is a Mandarin speaker, who switches to English when he’s at his most insincere. Chan and the mainland team talk to each other in their own dialects, but Chan speaks in broken Mandarin when he’s frustrated and doesn’t feel understood. There is even remnants of British colonialism, when we see a younger Chan held back by his lack of English, a point that is returned to and sideswiped in the film’s relaxed denouement,  showing how Hong Kong and mainland identities have shifted, becoming a little more integrated.

The dual setting of Special ID in Hong Kong and the Guangdong city of Nanhai, along with the mixed origins of the cast, are indicative of current climate in the Chinese film industry. The increasingly common and complex collaborations of mainland and Hong Kong talent and expertise, show a modernity China wants to promote, and an acceptance they have a lot to learn.

Special ID does very little to break the mould of this HK stalwart story, but it’s a cast poured so perfectly, why would it want to. Balletic gunplay and two fantastically choreographed fist fights, naturally grow out of the story’s development. With the first fight in a subterranean bar, and a final showdown, on an elevated, sundrenched motorway, it chronicles redemption.

Special ID will be showing at the Prince Charles Cinema at 6pm on Saturday May 31st, as part of the Terracotta Far East Film Festival. You can buy tickets here: