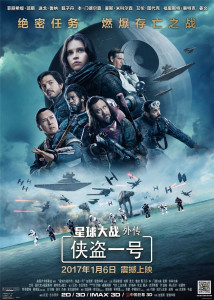 Almost every geek in the Western hemisphere, and many on the other side, have anticipated the release of  the Star Wars spin off film “Rogue One”. I managed to see it last week, and was impressed with it. I loved how it filled the narrative between Episodes 3 and 4 of the saga, without making itself a necessity, how it tied in very snuggly with animated series “Star Wars Rebels”, which I have also been following, and how, despite its gritty tone, was ultimately uplifting. There is something eternally gratifying about seeing a small, unlikely band of outlaws with more guts than ammo railing against the dread powers that be. What I most loved though, was seeing actors from my home country, Donnie Yen and Jiang Wen, in a movie that is part of a new, sprawling global mythology.

The film is expected to do very well in China when it opens in January. Its title 侠盗一号, (“Xia-Dao Yi Hao), uses characters denoting both bandits, and honourable swordsmen. The poster featuring Yen and Wu at the centre of the group has already grabbed the attention of Chinese geeks. I feel that the Star Wars universe is exceptionally accessible to a Chinese audience.

It is well known that the construction of George Lucas’ “Star Wars” universe, was influenced by Eastern film and culture, Darth Vader’s helmet and armour having been modeled on samurai armour. Character names such as Obi-Wan Kenobi, Qui-Gon Jinn and Kylo Ren, designed to convey a sense of non-earth otherworldliness, seem to sit linguistically somewhere between the Middle, and Far East. Perhaps it is no coincidence that whenever I hear Kylo Ren’s name I think of “gwai lo”, the colloquial Cantonese term for foreigner, literally “ghost person”.

The concept of the Force, and its creation of life, bears remarkable similarity to the Chinese principles of 元气, “Yuan Qi”, the primeval energy from which all things came into being, and the 道, Dao, the natural way in which all things operate, that is derives from Yuan Qi. It is one omnipresent energy, that connects all beings. The Dao (also known as “Tao”), is made of, or can be seen as having, a light, and dark side. The Yin and the Yang. For the Chinese, balance between these forces are vital, and without it, the world would be thrown into chaos. The growing of the Dark Forces in the Star Wars universe coincides with a weakening of the Force overall. The tale of the Skywalkers is one of legend, a prophecy of one who would come from the Force, in order to restore its balance.

Studying the Way of Dao, and harnessing the energy that is all around, supposedly allowed Daoist monks to achieve Jedi Knight-like powers, including  kinesis and levitation, while some like He Xiangu and Tieguai Li, could apparently even heal the sick and have the power of foresight.

Archetypes from Chinese Wuxia also appear in the Star Wars universe. From the swamp that he lives in, the simple clothes he wears, to his wispy white hairs, bizarre manner and deportment, Yoda is in every sense the model of the ancient hermit master, a powerful kungfu master, underestimated and eccentric in his reclusion and decrepit appearance. How often have we seen a filthy character dismissed as a tramp or lunatic, that is, until they kick your ass?

Like Yoda, these ancient masters won’t impart their knowledge to just anyone. Apprentices, who pass their first test, being guided by a trusted associate, as Luke was by the spirit of Ben Kenobi, must continue to prove themselves worthy, and ready, while the Wuxia hermit puts the young student through impossible tasks.

Whilst Jedi combat is undeniably a martial art, we have yet to see an actual Asian character in the Star Wars universe (excluding the dreadfully stereotyped Trade Federation representatives). “Rogue One” corrects this with two fantastic actors. Chirrut Îmwe, a blind monk martial artist is played by the amazing Donnie Yen, and the gunman Baze Malbus, played by Jiang Wen.

Donnie Yen was born into a martial arts family and trained by both parents from the age of four. The complicated fight scenes were a piece of cake for Yen, actor, choreographer and director whose repertoire of roles include swordsmen in “Drunken Tai-Chi”, “Iron Monkey”, and “Iceman”, not to mention a slew of kungfu chopping cops. Yen’s work on the Ip Man series has also strongly created his on-screen persona as a quintessential Chinese hero, yet he is not always such a serious deadpan lead. His roles in “Painted Skin” and “Special ID” show that he is able to infuse his characters with humour and imperfection, which again is perfect for the role of Chirrut, a Force-attuned warrior monk of Jedha, even with no Jedi to train him, has a natural affinity with the force.

Anyone who has grown up with Wuxia knows that when you meet a blind swordsman who walks into a platoon of troops without showing fear, run.

I feel gratified that despite Chirrut and Baze both being very much support characters, their roles are rounded, and their contribution to both the rebel defence and offensives are invaluable, offering weighty wisdoms that clarify the plot and insightful commentary into the thoughts of Cassian and Jinn throughout. Both characters are very much larger than life, especially Baze, with his wild hair, immense bulk and deep sonorous voice. They add vibrancy and colour to the band of rebels, which is otherwise short on diversity in a universe populated by an amazing array of aliens.

Jiang Wen, who began his career by portraying characters such as the young delinquent in his director debut “In the Heat of the Sun”, and maturing into the super cool villain in “Let the Bullets Fly” as a much older actor, brings not only gravitas to the role of Baze, but also a rounded treatment that echoes his performance in “Red Sorghum”. A film about rebellion and occupation set not such a long long time ago.

My childhood in China, and adolescence as a young immigrant to the UK was spent immersed in my heritage and classic English literature, interspersed with “Star Trek”, “Quantum Leap” and “X-Files”. I came to “Star Wars” relatively late, with the prequels, and watched them in numeric order. I found them peculiar in their amalgam of influences. Certainly not Eastern enough to feel familiar, but not entirely Western either. A myth that I was not part of. Later in adulthood, I found myself very much drawn to Episodes 4-6. Star Wars became a bigger part of my life with ritual watching of these movies with my new friend groups, taking part in role-playing events and listening to audiobooks of the extended universe.

I now find myself attending exhibitions and screenings with the same amount of anticipation as those around me, with the cultural weight, and context, of these epics in my consciousness. Many living in China have made the journey a lot earlier, through lianhuanhua (comics) telling the story in Chinese with creative, fresh artwork and character designs by domestic artists. Aspects of Eastern cultures have also been made accessible with their journey to the West via “Star Wars”. I hope that one day, epics from China, can make the return journey,  to be an inspiration and beacon for the global audience. With a fresh take on the “Three Kingdoms” story, and the first of Jin Yong’s wuxia novels in English on their way next year, I feel that new, culture spanning mythologies will become more powerful than you could possibly imagine.