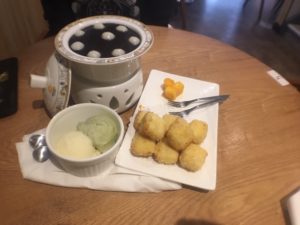 Summer is finally coming into full swing this year in the UK. Summer is my favourite season. It’s a time that always reminds me of my hometown, the subtropical city of Guangzhou. A while ago, I was thrilled to find that as part of the renovations of London’s Chinatown, southern Chinese dessert parlours were finally coming to Britain. So as a follow-up to Sweet & Sour, which talks about traditional desserts, let me introduce you to some of the delights of contemporary Chinese sweet treats that are now well within your reach.

While they might be exotic around the rest of the world, mango and durian are popular summer fruits in the Asian tropics. The tropical south of China is the origins of a certain style of dessert cafes. It’s no surprise that these fruits are the staple ingredients there. If you’ve never had durian before, handmade ice cream, containing a much milder flavour of the real thing, makes a good introduction. The strong scent of durian lends itself well to ice cream.

There’s a mango flavour in practically every category of dessert, ice cream, shaved ice, waffle, pudding, just to name a few. With the influence of Western sweet eats come durian & mango pochettes. I prefer this version (above) I had recently in Guangzhou, called Mango Cheung Fun (like the savoury dim rum sticky rice rolls). Less cream, more mango and wrapped in a translucent sheet of rice drizzled over with mango syrup. Other popular tropical Chinese flavours include pineapple, coconut and taro. 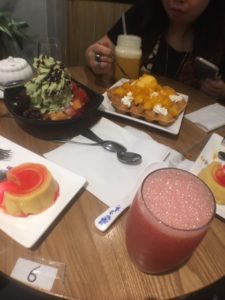 Soft egg waffles ice cream are appearing in Chinese cities over the last few years, often served as a large cone filled high with said iced dessert and fruit, great for grabbing when you’re out shopping. Alternatively, it can be enjoyed, laid out on a plate, with a glass of watermelon juice or cold oolong cream tea.

Ice, taken in multiple forms, has long been a traditional summer treat for cooling down across Asia, in China, ever since the 7th century. Whereas the green and red bean ices of my childhood consisted of larger pieces crushed manually, today’s technology enables finely shaved ice like this pao bing. Flavours such as red bean and tea pay tribute to its roots, and still taste delicious without being cloying.

Chao bing, stir-frozen ices, have recently been gracing the street stalls of southern China. Go for an evening stroll, stop off at a fruit stall, pick your fruit and they make it for you right there. It’s fun to watch and tastes even more cotton-soft than shaved ice. This one was made with grape and pineapple.

Cooling, yet nourishing, with oodles of health benefits, the Cantonese tong soi, or sweet soup, is timeless. Simmered in water and crystal sugar, popular ingredients include dates, lotus seed, white fungus. This traditional dessert gets a modern makeover in a cute pumpkin-shaped bowl.

You can find a lot of the dishes I’ve talked about in Chinatown, I recommend Guo C 100, on Newport Court. I leave you with a new custard dessert I found a few years ago in Guangzhou. Custard is a Cantonese favourite, whether it’s buns, tarts, or just by itself. What better vessel to present it in than an egg shell.