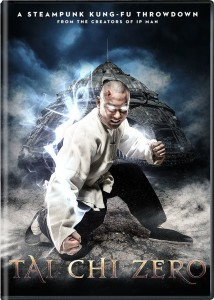 Tai Chi Zero last year, I was incredibly impressed and couldn’t wait to see it. Tai Chi Hero, the sequel, was released a month later, October 2012. So far there has been no UK release. On May the 4th, I got to go a one-off showing of the two films in Stratford, courtesy of Terracotta Distribution cross promoting with Sci Fi London, the amazing people who brought the films for showcasing so that English film lovers got a chance to watch it. Tai Chi Zero blew me away. So as well as adding this review to my repertoire of Chinese pop culture articles, I also hope that it will in some way, help with films find a distributor in the UK.

Tai Chi Zero/Hero are directed by Stephen Fung (House of Fury, Jump) and set in the mid to late Qing period, late 18th to early 19th century. Born with a flesh horn on one corner of his forehead, it was clear that Yang Lu Chan was very special. Bullied and ridiculed from birth, his mother died trying to save him, urging him to work hard on his kungfu. Yang is then brought up by a talent scout for the imperial army, where full use is made of his flesh horn, when pressed it enables him to fight like the devil and gives him an insatiable appetite. A kind doctor tells Yang that he has the rare gift of “gathering of three flowers”, if harnessed the potential is infinite, but it is currently consuming him from the inside. So Yang’s life and his promise to his mother, now both depend on finding the master of the Chen village and becoming his disciple. Greatness does not come without strife. We follow our hero as he overcomes a string of deadly hurdles, meet the village’s array of colourful characters such as Sister Mahjong, Brother Tofu, kungfu prodigy Zhao Di and Yu Niang, the clan master’s alluring and sassy daughter whose fiancée Fang Zi Jing, an employee of the East India Company collaborating Chinese government to destroy the village in order to build a railway – cue the steampunk stuff.

We live in the age of the integrated experience. It is not the first time that movies have incorporated interactive elements to engage the audience. Scot Pilgrim is famous for its excellent video game gimmicks, Sherlock’s pop-up texts have proved a huge hit, even weighty period Chinese films such as Chen Kaige’s Sacrifice enlivened the contents of a scroll with animation. However, few have integrated so many forms of media with film so successfully as Tai Chi Zero has, from the stylish animation and comic panels, to the dating Sims and fighting game pop-ups, to the moving map, travel guide to the village and animated diagrams tracing the energy movement and target points of the kungfu moves as the happen on screen. The pop up of characters’ names and titles in traditional Chinese format (top to bottom, right to left), harks back to classic kungfu movies of the 1960s and 70s. I love the fact that cool stuff about the actors themselves have been included after the title, such as “2008 Olympics Champion”, “chief instructor of the Italian Tai Chi School” and “1970s kungfu movie star”.

They say, to any steampunk, stick a few cogs on it.The steampunk in Tai Chi Zero is a lot more than just a few cogs. The producers seem very clued up on the genre, just look at the movie posters, alternative DVD covers and Huayi Brothers logo intro. And the yin yang symbol does lend itself so well to drawings of cogs and wheels. The East India Company’s obviously steampunk giant mechanical monster is certainly impressive, but steampunk is more subtly weaved into the characters’ daily lives. When Yang meets Yuniang in the herb garret, her attire of a faded greenish grey leathery Chinese style tank on top of a beige shirt, with an array of different bags, pouches and tools around her waist, is always what I should Chinese steampunk would look like, minus the jade fueled jet pack. When her eldest brother Geng Yun, the outlaw mechanic who prefers cogs to kungfu, appears at the end of the first film, the sampan and Chinese gown he wears draped over a metal-plated waist coat not only captures the adaptive and DIY essence of steampunk but also the essence of the character, as you will see in the sequel. I do hope to see some Chinese inspired steampunk costumes at conventions from now on.

When watching a wuxia or kungfu movie, if you see Samo Hung’s name under “choreographer”, you are in safe hands. Tai Chi is based on manipulating the transference of one’s inner vital energy or qi, often by using the opponent’s own attack against them. So it’s hardly the most hard-edged of fighting styles, looks more like a dance than a fight. However, the metal and rap music set with the excellent choreography, brings out the hardcore nature and kickass effective of Tai Chi. This and the interactive elements place the film in the same poppy, quirky and kitsch period movie space as the likes of Kill Bill and The Man with the Iron Fists, although Tai Chi Zero has the added substance of being well research in terms of period detail such as apparel and architecture. Asian movie buffs will get a thrill out of seeing cameos from Shaw Brothers director and master of wire-fu Andrew Lau as Father Yang and Fung, the director of this movie as Nan.

On the Chinese side, Tai Chi Zero’s Hong Kong, Taiwan and mainland collaborative cast have all acted out their roles pretty well, with the urbane characters speaking excellent received Mandarin, and village characters talking in the local dialect of Henan, where Chen village is located. Yang’s own dialect helps to accentuate to his characteristic naivety and guilelessness. I was especially impressed with Tony (Kar-Fai) Leong, the renown Hong Kong star whose Mandarin is surprisingly good. Sadly I can’t say the same for the English-speaking cast, at least the actor for Fang had an excuse for not being able to say his English lines properly, being Chinese. As for the characters of Claire Heathrow and the Governor, agents of the East India Company, not only do they seem incapable of acting, but also incapable of speaking English. It is apparently quite profitable for laowai to be hired to play foreigners in Chinese films, but it would be sensible, to pick laowai who can act, and when casting linchpins of the British Empire, to pick actors who can speak English properly.

I have one final quibble about the subtitles. Filmakers often invest an exorbitant amount of money in casting, location hire and special effects, but tend to forget the importance of translation and subtitles, which have become even more important now that more films aim for a global release. At the end of Tai Chi Hero, when the Emperor delivers a line that is crucial to the story on how Tai Chi as a school of kungfu got its name, the translation in the subtitles was so bad that some of the audience laughed. Tai Chi as a form of kungfu has become so famous that the term is synonymous with the kungfu, but the principle of Tai Chi originated from the I Ching and is the source and union between two primary aspects of the cosmos, the Yin and Yang. The Emperor named the Chen Clan school of kungfu after this principle precisely because it united the two forces. In the subtitles however, completely lacked an explanation of the concept of Tai Chi as separate from the kungfu, thus leaving the audience bemused about why the Emperor was naming Tai Chi, Tai Chi.

Tai Chi Hero seems very much to be the weak second movie in a trilogy, where the fight scenes are rushed through and the interactive elements that have made the first film so unique, seemed to have been forgotten about and tagged on at the last minute. I hope that the final Tai Chi movie will every bit a awesome as the first one. All in all, I am sensing a distinctive new and vibrant kind of energy from many recent wuxia films that have come out of China, such as Journey to the West: Conquering the Demons, Tai Chi Zero and trailer for The Guillotines (2013, directed by Andrew Lau). What all these films have in common, is the combining of kickass kungfu and wuxia sentiments with technology. With world wide popularity of steampunk and the recent emergence of a sci fi scene in China. This is no coincidence. I said the “trailer” for The Guillotines because the film has proved that having a cool trailer cannot balance against the lack of a good plot, good character development and not enough of what made the trailer cool – those guillotines. It’s great to see Zheng Qi Peng Ke (steampunk) is putting the Qi back into Tai Chi. I hope this trend is here to stay.

First published on Xanga May 2013