7th Aug, 2019 The Boss Behind the Cowherd and Weaver Myth 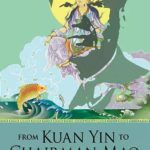 This time last year, I launched my book “From Kuan Yin to Chairman Mao: An Essential Guide to Chinese Deities” in the UK. Vivian Ni, the wonderful manager of Guanghwa in London, my bookshop of choice for the launch, wrote a lovely article for the occasion of Qi Xi, which she published on WeChat. I liked it so much that this year, I have translated it into English to share with my English-language readers on the same occasion of Qi Xi. The article contains a brief interview with me, I hope you enjoy it.

How Much Do You Know About the Big Boss Behind the Cowherd and the Weaver?

This August, I devoted most of my time to this “magical book”. Truly a cultural guide to Chinese deities

Author Xueting Christine Ni takes 60 deities from Chinese religion, mythology and folklore, presenting them in different types and categories, and carries out a careful exploration of their origin, development and influence on popular culture. 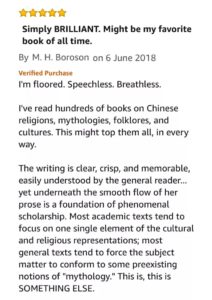 There really aren’t many books that cover Chinese culture in such broad yet detailed manner, some readers have expressed their elation in their reviews. This rapture isn’t exclusive to Western readers, even someone like me, who considers herself familiar with Chinese culture, has found it hugely rewarding.

For example, I never knew that before she became the “Tiger Mother” that split up those famous lovers, the cowherd and the weaver, Xi Wang Mu, the Great Mother of the West, had been a half woman half beast leader of the Western regions. I had no idea that in certain regions of China, such as Chao Zhou, offerings are made to Chuang Jiao Po or the Granny at the Foot of the Bed, rather than the weaver goddess, on the seventh of the seventh, for the safety of women and children.

There are many many more “I didn’t know”s.

Just before Qi Xi, I had a short interview with Xueting for the occasion. In my mind, Qi Xi has subtle and profound significance in the development of feminism in China. In the old days, women ventured out of their domestic roles, displayed their skills, and performed rituals such as the hair washing ceremony – a representation of their longing for freedom and love. Even though their shackles have long disappeared, that hard-won freedom that Qi Xi had traditionally brought women, have inspired subsequent generations. I wanted to explore with Xueting, how she as a female writer, sees the role of women and the development thereof in the culture of Chinese deities, as well as her own memories of Qi Xi. 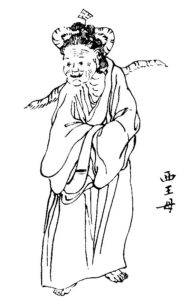 In your book, you mentioned a series of deities who became feminine overtime. For instance, Xi Wang Mu (originally half human and half monster), Guan Yin (originally a male god). How do you view this kind of gender transformation in Chinese myths?

This kind of gender transformation is certainly interesting. Whilst the predominant trend in Chinese history is a change from prehistoric matriarchies to imperial patriarchy, which is reflected in the imbalance between the number of male and female deities, the development of certain gods have transcended this pattern, for example, Guan Yin, who became female because of socio-economic factors – to provide representation for the increase in women among the nobility seeking a life of devotion during a certain period in history. Xi Wang Mu’s transformation has more to do with Chinese society becoming more human centric, a process common to many cultures around the world, you’ll find a similar kind of transformation in the thunder deities. Moreover, in my selection of writing subjects, I have aimed to redress the gender imbalance in the Chinese pantheon, not only by featuring goddesses but bringing those whose stories have hitherto been overshadowed by male deities, like Nü Wa and Hou Tu, to the forefront.

You mentioned Xi Wang Mu many times throughout the book: from the half human half monster in Classic of Mountains and Seas, to a graceful lady in Travels of Zhou Mu Wang; from the elixir custodian (which eventually sent Chang’E to the moon), to the mother who separated forbidden lovers. How do these changes in Xi Wang Mu’s images reflect China’s cultural and social backgrounds at different times?

Xi Wang Mu’s development reflects the natural progression of society from totem worship to anthropomorphic veneration. She may have begun as an actual tribal leader in the Western regions during a time when the tribal leaders were the all-powerful figures. It was fitting for her to become the Supreme Goddess as society became more urban and bureaucratic. She has remained an all-powerful figure but her role changes with the times, after civilisation gained more control over pestilence and laws were more established, she became the grantor of happiness, longevity and children. There are even certain strands of folklore that tell of the goddess defending women’s rights.

Do you have any childhood memories of Qi Xi, what are they like? According to your research, how do you think the customs and significance of Qi Xi have changed and evolved?

There are two aspects to the Qi Xi, the romantic side and the celebration of craft skills. I attended primary school in China before moving to the UK and remember learning about the Niu Lang Zhi Nü myth in class, the myth was what I predominantly associated with Qi Xi as a child. It was only later in my research that I found out about the old customs of Qi Qiao from different regions, such as needle-threading in the moonlight, searching for spider webs and making small craft objects, which no longer seem to be in widespread practice, at least in cities – because in the old days, in a city like Guangzhou, my hometown, where clothes-making is a major industry, these activities would have been very prevalent. In recent years, however there’s been a revival of Qi Xi not just as the Chinese Valentine’s Day, but a celebration of traditional clothing. Couples getting married in Chinese wedding clothes with elaborate embroidery, and young people going out to conventions in costumes from period fantasies and dramas, are a true celebration of traditional Chinese textile crafts – and unlike in the past, this is a trade that is no longer confined to women.

A general final question – what triggered you to write this book? While customs to worship certain deities vary across different areas, how did you do your research and gather these many bits of information?

The topic of choice was partly due to involvement from my publishers, partly because as a writer of Chinese culture, I’m fascinated by this vibrant facet of a society that has been perceived by the West as secular for so long. Spirituality and folk religion in China is not confined to a niche or minority, but embedded within its social and cultural history, and entwined with the customs of the communal and the everyday. What’s more, like the best of China’s pop culture, it’s something that’s very much alive and evolving. So, I think with so much contemporary interest in China from all kinds of readers, reading about this subject is one of the best ways of getting to know the Chinese and their society. This is why I have taken a cultural approach to writing the book.

My book is available at Guanghwa and other bookstores as well as online retailers in the UK and US.