This article is dedicated to the cats of Canton. Cats were introduced into China via Persian Empire and Egypt. The Chinese term for cat “mao”, phonetically resembles very closely the Egyptian “mau”. To this day, the predominant pedigree in China, tends to be the Persian Longhair. As a child in Guangzhou, I remember spending a lot of time with a white Persian named Tao Tao, whenever my frantically busy mother deposited me at the neigbour’s for the evening or the weekend. Tao Tao, whose name means “naughty”, was anything but. In fact, she was rather timid and skittish, my over-enthusiastic playfulness sometimes sent her scuttling to a dark corner of the flat to hide.

Other cats I had encountered in China seemed equally a bundle of nerves. When I visited my Cantonese aunt and uncle, their bleary-eyed, long-haired white, simply called “Mao Zai” (Cantonese for “kitten”), used to scurry into the bathroom at first, as soon as I stepped through the door. 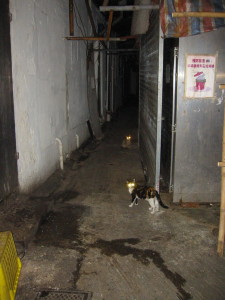 Feral Chinese cats however, are an entirely different matter. In Hong Kong, we wandered the alleys after visiting night markets, and numerous lithe, spotted moggies seemed to emerge from nowhere, gazing at us with their large luminescent eyes, they ambled along with us, expectant of treats, or at the very least some petting.

In Guangzhou, we dressed up in our goth outfits and went for a photography shoot among one of the hundreds of half demolished old residential areas, hidden deep in the maze of hong (alleys). There I saw half a dozen young children, happily entertained by a tiny, spritely stripy kitten who looked more than capable of looking after itself.

On an evening walk in Shanghai, we cut through an alley behind a hotel to get to the next main road. We found it a rather uneventful shortcut, until we suddenly noticed six or seven pairs of bright green eyes, eerily observing us from the flower beds under the trees.

At Beihai park in Beijing, where we held a picnic on Mid-Autumn Festival, we had little trouble consuming the entirety of our sumptuous feast that included marinated chicken gizzards, pigs feet and moon cakes, with the aid of many uninvited guests. Minutes after we’d opened our tins and boxes, cats of all shades, shapes and sizes, began to gather around and encircle the large stone where we sat in higgledy-piggledy circles, adopting their best leonine poses. I had never in my life, seen so many cats all congregated in one place. 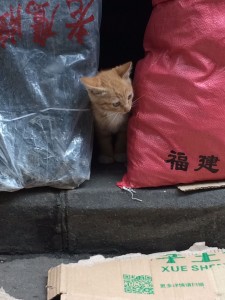 When Chinese society was predominantly agricultural, cats were an indispensible farmhand and household member, relied upon to exterminate mice from the rice paddy fields. Remnants of their early function can still be seen in the Chinese character for cat, 猫 which very much presents them as guardians of the field. “Tian” 田, meaning field, accompanies the animal radical; also making up 苗, “miao”, the character for shoot (young crop) with the plant radical on the top right.

In 21st century China, dogs have become increasingly a popular pet, as I found when living in Beijing. In the old town residential area where our flat was located, the street would be dotted with owners walking their corgis or chihuahuas in the cool summer evenings, with the occasional baby husky bounding along the verges.

However, in the old trades of the hot southern cities, you will still find that cats dominate. Whereas owning certain types of dogs seemed to have become a status symbol, cats are still cultivated by a lot of people in China, because they do a vital job, as highly effective pest control. 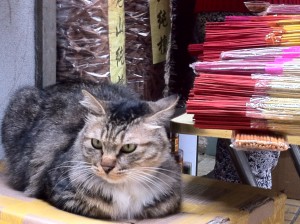 In old-town areas of Guangzhou, cats are as much part of the landscape as the arcade architecture and banyan trees. If you walk along the dried fish sellers of YiDe Road, you’ll see them weaving their way through baskets, nosing piles of boxes, traversing brazenly the busy alleyways, somehow managing never to get run over by the constant traffic of bicycles and trolleys. If you meander through Qingping Herbs Market, you’ll see them threading between sacks of dried HuaiShan or Caterpillar Fungus, to peak at the customers, enticed by the smell of the cured Cantonese sausages being steamed rice in the rice cooker just outside the shop – the scent of old Guangzhou. They dose on sacks of rice, emerge in groups of five from the dark corner of convenience stalls that look as old as Guangzhou, with their glass bottles of SarSi (Asian soft drink similar to root beer), handset rental telephones where you can still pay a couple of Yuan to make a call, and jars of pickled raddish, carrots and cucumber to be sold on sticks. They prowl the alleyway god shops full of incense, spell tags and statues, like the resident deity, sprawling themselves across the entrance to bask in the sun. Occasionally, bigger, grumpy-looking tabbies are seen outside clothes shops, like feline security guards. 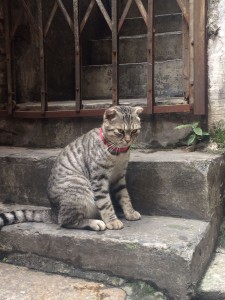 I have often wandered why owned cats in China are either so timid or so grumpy. As a cat lover myself, having observed so many of these creatures in their different habitats around China, I have come to the understanding that a significant majority of owned cats are still fulfilling their traditional functions, as working cats, just at different establishments, shops and restaurants instead of crops and fields. And they are treated thus, like staff, much like the cats that lived in mills in Britain, right up until at least the end of the 19th century. Feline pets in wealthy homes on the other hand, tend to receive an inordinate amount of fuss, and not the type that a cat enjoys. With a near constant amount of washing, brushing, vitamin and anti-viral injections they are getting, is it any wonder that most of these cats are constantly apprehensive and on edge?

Owning cats as pets is a relatively new thing in China. It will take time for pet owners to learn not to treat them like dogs, but like cats. 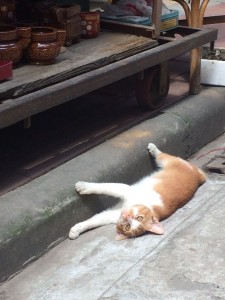 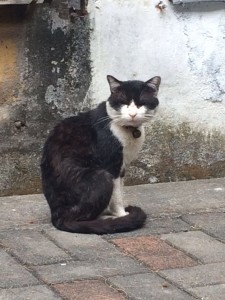