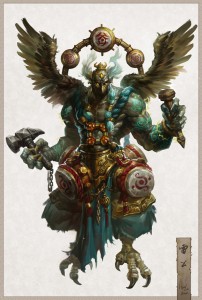 Nowadays rarely does a deity become hot topic, like Thor has, with the aid of Marvel and Hollywood blockbusters. In Chinese Thor is called 雷神 (“Lei Shen”) or God of Thunder. It is no wonder that the Thor movies have proved popular in China, as the Chinese have long had their own deity of Thunder.

The ancient Chinese were big worshippers of the Thunder, and Lei Shen had evolved through many guises. From this evolution can be seen a gradual process of anthropromorphism. In early Chinese myth, Lei Shen was depicted in mostly animal guises, usually a scaly dragon body with a human head. The ancient Chinese had bestowed on him features of the being they considered most powerful, their totem, the dragon.

By the 17th century, he had evolved into a half naked, winged Herculean warrior. On his crimson visage are three eyes and an eagle’s beak, as sharp as the talons on his feet. He carries an ancient Chinese battle-axe in one hand, and a mallet in the other. Around his waist are five drums. The Taoist deity of Thunder and Thunder Craft have their roots in these pagan traditions.

Lei Shen is popularly known as “Lei Gong”, or Old Man Thunder, a term that first appeared in the works of the poet Qu Yuan, who is celebrated during the annual Dragon Boat Festival.

In the sub-tropical region of Guangdong, where thunder strikes most spectacularly, there is a peninsula named after Thunder, 雷州, “Lei Zhou” or Land of  Thunder. Legend has it that a man from the peninsula went hunting one day, he found an egg and brought it home with him. A child hatched from the egg with these two characters written on his palms. There is still a temple dedicated to Lei Shen in Lei Zhou today.