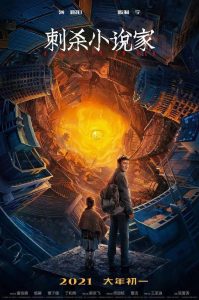 As Chinese New Year draws close, it’s worth spotlighting a relatively recent tradition, the ‘Hesuipian’, literally, “film to celebrate the birth of a new year”, the New Year Movie, which has now become a tradition of four decades.

The origins of the hesuipian can be found in Hong Kong cinema in the 1980s, when the hottest stars and directors of the year would team up to make movies specifically for  release on the first day of Spring Festival, New Year’s Day. These were lighted-hearted comedies, often slapstick with plenty of entertaining action, to boost festive spirits during the season. Some of the earliest examples are the action comedy “Security Unlimited” (1981) directed and self-starring Michael Hui, cop comedy My Lucky Stars (1985), directed by Sammo Hung, and Johnny To’s family comedy Eighth Happiness (1988). Later, even films like the sci-fi action flick The Heroic Trio (1992) starring Michelle Yeoh, Maggie Chung and Anita Mui, were scheduled for a Spring Festival release.

Stars like Chow Yun-Fat and Jackie Chan became regulars of the hesuipian and Stephen Chow even developed his own distinct style of “moleitau” humour from the popularity of works like “A Chinese Odyssey” (1997). Over these two decades, the hesuipian was gradually gaining popularity in mainland China, where TV screenings of these films had created an audience for the genre. With the much longer break around the Spring Festival holidays, a trip to the cinema provided a welcome source of alleviation from the monotony of endless meals and family visits.

Feng Xiaogang’s “The Dream Factory” (1998) marked a key moment in mainland hesuipian. The Feng School of blending everyday social drama with black humour and heart-warming twists to the plot borrowed a lot of the redemption and heart from Western ‘Christmas Movies’,  creating uplifting works which the whole family could enjoy together. This did not mean that they were all happy and light.  Feng’s 2004 film “A World Without Thieves” has a pair of crooks defending a worker making the big migration home with a whole year’s savings, but has a tear-jerking tragic conclusion. It is now considered an all-time hesuipian classic.

The phenomenal growth of the mainland’s film industry, in terms of talent, expertise, quality and quantity of output over the last twenty years, combined with the rise of China’s Age of Cinema over the last decade or so ensure that the hesuipian holds a special place in China’s box office and in people’s hearts. Every year, hundreds of domestic films vie for the prime release of danian chuyi, the first day of the new year, and only a dozen make it.

A few months before Chinese New Year, China’s net space would be buzzing with media offering a digest on the new year’s hesuipian releases, and people chatting excitedly on social media about the movies they’re looking forward to most. China’s strict COVID-19 measures have meant delays and probably shorter post-production time on this year’s hesuipian, but 2021’s list is another feast of comedy, action, drama and fantasy. There are three films in particular the internet buzz of which have drawn my attention and set off my culture radar.

Endgame 人潮汹涌
Directed by Rao Xiaozhi and produced by Andy Lau (who of course, also stars in it). We have a story of a cold-blooded assassin and a lowly office worker, who lose their memories after an accident, and due to a mix-up, swap lives. Although this is an adaptation of the Japanese film “The Key of Life”, it continues China’s own excellent hesuipian tradition of diving into social commentary with rich black humour.

Assassin in Red 刺杀小说家
I had been intrigued by this story ever since I saw the trailer in July last year. A man is told that to save his daughter, he must kill a novelist who believes his characters exist and the things in his novels happen in real life. Directed by Lu Yang (Brotherhood of the Blades) and starring Chinese screen queen Yang Mi, like a lot of successful films and TV series, this thriller fantasy takes inspiration from the rich resource of China’s flourishing contemporary literature, and is adapted from a short story by Shuang Xuetao. It’s worth pointing out that the Chinese title of the story and film mean: “Assassinate the Novelist”.

New Gods: Nezha Reborn 封神榜：哪吒重生
From Light Chaser Animation, who brought us the gorgeous “White Snake” (2019), this modern retelling of Nezha’s story, directed by Zhao Wen, features Nezha as a motorbike riding rebel youth, who awakens to find that an ancient battle, with the now sleekly suited and tattooed archvillain dragon kings, continues. Having written about the superb adaptability of this child god in my last book and other articles on China and its high technology, I can never resist a contemporary adaptation of Chinese mythology, and continue to be amazed at the deity’s ability to evolve.

Over the last decade, successful heart-warming hesuipian comedies have spawned chains of sequels and spin offs, like Xu Zheng’s “Lost in…” series, and Chen Sicheng’s Detective Chinatown. Stephen Chow has continued his success, returning repeatedly to Journey to the West, with better CG and bigger budgets. Every year’s hesuipian seem to outdo the previous. 2019’s The Wandering Earth (directed by Frant Guo), the sci-fi blockbuster adapted from Liu Cixin’s work even made waves around the world.

Even though the actual concept of the New Year Movie emerged at the end of the last century, it is the modern incarnation of a much older Chinese tradition of elaborate Spring festivities. In the old days, wealthy households would hire acrobats and opera troupes for the tanghui, private performances in their back gardens or personal theatres. Nowadays, the entertainment can be enjoyed by everyone at the cinemas or in the comfort of their own homes via streaming platforms, whether it’s the Chunwan (New Year Gala) or the hesuipian. Today, the hesui industry has sprawled beyond the big screen, with acclaimed directors like Jia Zhangke preferring to make shorter films on smaller screens, big brands and online shopping platforms releasing mini movies that have become their much-talked-about annual big budget adverts.

Whilst much of China has returned to a cautious normal, and cinemas hope for a good hesuipian season to recover, many people will stay at home and watch titles on streaming services, and even Netflix are releasing some big-name Chinese films in time for the holidays. So if you can’t make it to the cinema, maybe some classic new year films will give you a respite from the constant stream of dumplings, snacks, and relatives who can’t quite work out how Zoom works.