8th May, 2016 The History of Manhua: Beginnings

The roots of comics and cartoons have been in satire throughout the world, and China was no different. 漫画, Manhua, existed as early as the Eastern Han era, where a stone carving had been found in Shandong (author unknown), caricaturing the despotic Xia Jie. During the Five Dynasties period (10th century), the artist Shi Ke’s paintings satirized cruel aristocracy who exploited the poor, in works such as the “Baigui Xitu” (Frolicking of a Hundred Demons). 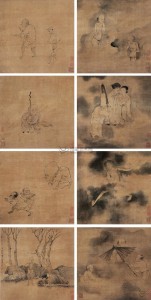 The art of satire became far darker during the early Qing period (17th to 18th century), with Ba Da Shan Ren and the artist group known as the “Eight Eccentrics of Yangzhou”. The most famous of their paintings being the “Gui Qu Tu” (Ghost Amusement) set by Luo Pin. During this time, the oppressed populace was growing increasingly discontent with the corrupt government formed by rulers who, not long ago, had been the invaders. Their placing of heavy censorship on intellectual works led artists to find alternate channels for their dissent. Luo was influenced by Pu Songling’s metaphoric depictions of the horrors of society in his collection of ghost stories “Liao Zhai” (Tales from the Hearth), which was published around the time Luo was composing his Ghost Amusement set. The eight paintings present various grotesque ghouls and skeletons, some creeping around, some preying on the mortal world and others living amongst humans. The message of attackers securing themselves in society was obvious, but not overt enough to draw ire from the new ruling class.

Pictorial satire crossed over from fine art to pop culture during the first two decades of the 20th century, during the final decline of the Qing Dynasty and the republic era. China was still under threat of occupation by major European powers, warlords had seized different regions, fighting amongst themselves whilst revolutionaries and intellectuals debated the future of China. In short, the whole country was in political meltdown and artist threw themselves into the plethora of illustrated newspapers, circulating in Guangzhou, Beijing, Shanghai and Tianjin, to keep the general population updated on the latest political events and debates. The illustrations began to be published in annual collections by newspaper presses, with titles such as “The Bells of Freedom” which, published in 1909, was probably the first Manhua collection come out of China. 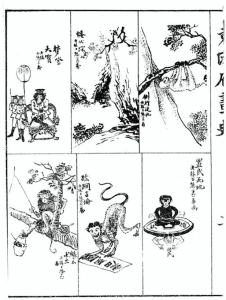 Societies and unions began producing their own Manhua, with artists expressing their views in folk art like Nianhua (New Year paintings often used as household decorations). Whilst some artists such as He Jianshi and Zhang Yuguang kept mainly to traditional ink wash art styles, later artists such as Shen Bochen and Dan Duyu, adopted elements of European art styles, in particular lithography and fountain pen drawings.  Whatever the method, these illustrations were steeped in folk culture and popular idioms of the time. He Jianshi tended to employ popular metaphors, local colloquialisms, whilst Qian Binghe favoured satirical hieroglyphs derived from Chinese characters. Both Qian and the artist Ma Xingchi were contributing to “Kuaihuo Lin” (Happy Woods), the “Shanghai News” supplement dedicated to Manhua. In Qian’s work, we can see the beginnings of multiple panels. Their illustrations struck such a chord with the public that they were quickly re-purposed, printed on pamphlets with slogans and distributed across the city.

After China’s involvement in WWI, the Paris Peace Conference of January 1919 refused China’s request for the return of Shangdong, previously under German occupation, transferring it instead to Japan; also refusing to cancel the secret agreement made by warlord Yuan Shikai and Japan granting the latter control over the governing of China. On May the 4th, hundreds of students marched in mass protests, which also called for reforms and modernisation. Manhua was developing and ripening alongside events leading up to “Wusi”, the May the 4th Movement, whose formation and unified actions owe much to the Manhua pamphlets .