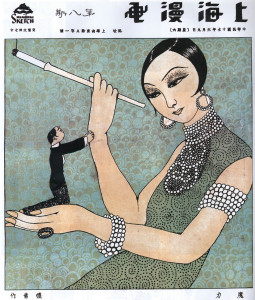 After exploring the ancient beginnings of the Chinese comics tradition, I take a look at manhua in the early 20th century.

Around this time, Shen Bochen, an artist who excelled in not only the fine arts, but also architecture, sculpture and Manhua, held China’s very first Manhua exhibition in Shanghai, and founded “Shanghai Puck”, China’s first publication dedicated to Manhua. The first issue sold 10,000 copies in East China alone, but despite its popularity, the magazine only ran four issues before it was censored and presses stopped by the very authorities it exposed and attacked, on the eve of Wusi.

Thanks for May the Fourth, Dan Duyu was able to pick up the mantle, as the first artist to publish his individual collection of Manhua, “Guo Chi Hua Pu” (The Shames of the Nation). Apart from pictorial diatribes against warlords colluding with European imperials and the Japanese invasion, what is worth noting here is Dan’s pieces on Shanghai life, depicting parts of the cities such as the ports, an indication of the widening of subject matter in Manhua. 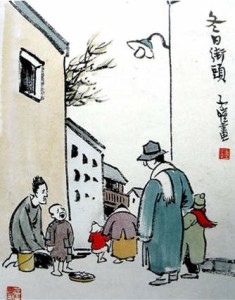 The 1920s saw further politicisation of the masses exploited by unfair rulers, and as spates of mass workers’ strikes broke out across the country and the unions began their rise, Manhua turned its focus from political figures to the people. Artists produced murals and posters as well as pamphlets to spread the word. A major force in early Manhua emerged. Feng Zikai, who popularised the word “Manhua” to refer to this kind of illustrative art in modern style,  highlighting it’s  slightly tongue-in-cheek in tone, be it satirical, caricaturing, or just witty and poignant. Feng championed the breadth of art that could be included under this banner, whilst he himself continued using traditional brush and inkstone for his informal and casual style.

China’s first Manhua society was founded in 1927 by Feng and a group of ten prominent artists, In the following year, they launched an eight-page weekly lithograph with four pages per issue in full colour, and a circulation of 3,000. Titled “Shanghai Manhua”, these pages provided not only a window into political happenings of the day, but also into city life as a whole, tinged with a sense of urban romanticism, expressing the desires and fears of young men and women, along with Zhang Zhengyu’s portraits of debutants and notables. “Shanghai Manhua” also hosted one of the earliest narative multi panel Manhua, Ye Qianyu’s “Mr Wang”, which ran weekly until the publication ended.

This series have been written with thanks to “The History of Chinese and Foreign Comics”, edited by Wang Ning and Gao Bo, Shanghai People’s Art Press, 2007.

“Mr Wang” is a comical depiction of the social life of a village land-owner who moves to Shanghai with his family. They encounter the whole array of complex urban society, from aristocracy, officials and policemen, to petty criminals and the flotsam and jetsam of the city. Under its influence, Lu Shaofei’s also serialized his humous Manhua story “Da Xiao Jian” (Big Baby). Not only were the artists providing the drawn content, they also had to provide the written content, edit each other’s work, typeset, and carry all other editorial and printing tasks as well as any necessary photography themselves. “Shanghai Manhua” ran for 110 issue, before it merged into  “Manhua Times”, by which point, it had made its mark as a pioneering work in Chinese comic history.

Manhua had developed slowly from its roots, but I am amazed at just how closely the links along the chain fit together, and how strongly any development has relied on what has gone before it,  building solidly on a history of irreverence. At this time, narrative Manhua was still known as 小人书, Xiao Ren Shu (Little People Books). In the next article, I will look at its development from the 1930s onwards, a Golden Age for Manhua, and the rise of the Lian Huan Hua.