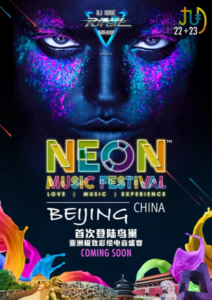 Zhong Qiu Jie, or Mid-Autumn Festival has come round again. I hope you have been enjoying my article and video on the origin and traditions of this wonderful Chinese harvest celebration, finding them useful for your festive preparations. This year, I’m writing about how the Moon Festival is celebrated in China today.

Even traditional ways of celebrating had regional variations. And this has continued today, in more contemporary formats. In the subtropics of Guangdong, where a huge variety of flowers are in abundance all year round, flower arranging is a celebrated art. Instead the usual exhibitions of elaborate floral and faunal arrangement designed by experts that accompany the lantern displays, parks in the provincial capital of Guangzhou, are offering flower arranging classes and holding talent shows for anyone who wants to participate. 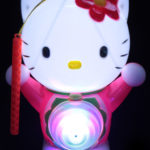 Zhong Qiu Jie has always been a nocturnal festivity. In the old days, people gazed at the celestial orb, appearing at its largest during this Autumn Equinox, among paper lanterns, while listening to music played on the Guzheng, Xiao and Pi Pa. Nowadays, new technology provides a different kind of audio and visual experience. The Neon Musical Festival entices with a spectacular lazer light show, to the sound of electronic music.

Traditional paper lanterns, which were lit through a hole at the top by a small wick inside, have undergone several generations of upgrades. A few years back, we found Transformers and Dragon Ball lanterns in the street markets, still made of paper but now with came with light bulbs and sound panels. Nowadays, children run around the parks at night with Hello Kitty, Piccachu and Disney-character lanterns, just to name a few, battery-powered, plastic and spinning. Traditional lanterns can also be bought alongside these ones. 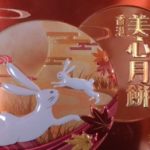 I have already covered briefly the huge variety and flavours of moon cakes, which have really mushroomed on the market over last couple of decades due to the commercialisation of gift-giving customs. Modernised packaging designs with traditional themes remain a favourite. Northern regions have created savoury varieties such as cheese flavoured moon cakes, whereas Guangdong and Hong Kong, with their long patisserie traditions, have been innovative on sweet tropical flavours such as mango, pandan and coconut. Bing Pi (“iced skin”) moon cakes with skins made from glutinous rice rather than syrup, and chilled rather than baked, were all the rage a few years ago. One of this year’s popular flavours seems to be durian. 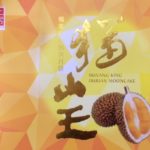 I’m leaving you with some great 手抄报 Shou Chao Bao drawn by school children on the theme of Mid-Autumn Festival. The Shou Chao (literary “hand copy”), is a term that referred to the handwritten pre-publication manuscript of a book, back in the days before desktop publishing. The Shou Chao Bao or Handwritten Paper, is the earliest form of the Chinese newspaper. Before the age of mass printing, it was written by government officials to pass on news to their regional colleagues. Later, it became a public information medium, appearing in poster form as well on blackboards that are installed in all the streets and alleyways of Chinese cities. It has been and still is a common task set by teachers to provide primary school children with a fun, well-rounded and creative assignment. Indeed, the Shou Chao Bao (often shortened as Shou Chao), is a form of popular art, involving not only creative writing, illustration but also elements of typographical, ornamental and layout design. Today, they are often posted on websites by teachers as a resource for early learning. 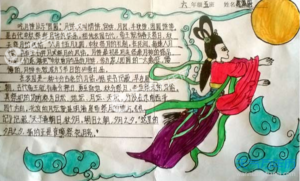 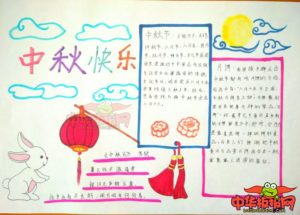 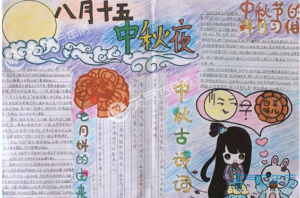