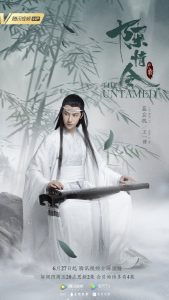 If you like your Asian historical dramas, Eastern magic fantasy, or Kungfu shows, you’ll have seen, or been watching, or at least heard of, The Untamed. With gorgeous costumes, props, sets; fantastic script, filmography and storyline, a great cast, and queer representation to boot, no wonder this mainland Chinese series, an unexpectedly domestic hit, has also achieved unprecedented global popularity. Originally a Xianxia (genre featuring humans interacting with supernaturals) web novel named Modao Zushi by Mo Xiang Tong Xiu, the series is steeped in Chinese culture. One of the central themes that really stands out is the multiple roles of music in the story. (Heads up, this article contains spoilers).

The guqin (seven-stringed zither) – and by extension, music, along with calligraphy, chess and painting, were the four pre-requisites of the classical Chinese gentleman. It is no coincidence that both the young masters of the renown xiushi (practitioners of the occult that serve their regional communities) clan of Lan in The Untamed, Zewu Jun and Hanguang Jun (formal titles for Lan Huan/Xichen and Lan Zhan/Wangji) are both well versed in music. The elder brother excels in the xiao (vertical flute) and the younger brother, the guqin.

The literati in ancient China, scholars and artists in particular, understood music and could communicate through it. This element sometimes manifests in Xianxia stories like The Untamed, in the form of Wenling practices, or consulting the spirits. At the beginning of the story, our two heroes, Lan Wangji and Wei Wuxian (Wei Ying) are sent to the cold springs at The Cloud Recesses to heal their wounds after receiving lashings for breaking the clan’s house rules. By accident, they fall into a cave under the springs, where Lanzhan eventually communicates via the guqin with the Lan Yi, the founder of his clan, who had sealed her spirit there in order to guard a piece of the Yin iron. Sixteen years later, we see Lan Qiren, current leader of the Lan clan being wounded in a Wenling session that goes awry. Combining their skills with the flute and guqin, Wei Ying and Lan Zhan manage to calm the powerful knife spirit, which then leads them to ancestral tombs of the Nie Clan, where Lan again speaks to the spirits of the dead through his zither to find the whereabouts of Jin Ling, Wei’s wayward nephew.

As we can see, the ancient principle of communicating through music is still represented in China’s historical and fantasy literature today. A well-known example can be found in Jin Young’s Return of the Condor Heroes. It is rumoured that the young leader of the Gumu Clan, is holding a martial arts contest on her 18th birthday for her hand in matrimony, along with the treasures apparently hidden within the sealed ancestral tombs, where she resides. Tempted by the prospect of riches, some tribe leaders head into the Zhongnan Mountains. No matter the provocations from the unwelcome guests, Xiao Longnü observes the rules of reclusion and celibacy of her clan, only making her fury known from within the tombs, via the sound of her zither, and then (because they fail to understand her), a swarm of angry Yufeng bees. Her strumming only mellows after Qiu Chuji, leader of the neigbouring Quanzhen Clan and others mediate the situation, at which point the music expresses gratitude, before bidding them farewell.

This intellectual ideal of finding affinity with another person through music, and by extension, the Arts, lead to the concept of finding one’s zhiyin through music. Still widely known in China today is the friendship between ancient musicians Bo Ya and Zhong Ziqi, whose stories are inseparable from the creation of one of China’s most famous pieces of traditional music, Lofty Mountains and Flowing Streams (Gaoshan Liu Shui – one of the pieces of music recorded on the Golden Record and carried into space by NASA’s deep-space craft Voyager in 1977). In Bo’s music, Zhong could hear the lofty Tai mountains and the mighty torrents of rivers. The two became such close friends that after Zhong’s death, Bo never played the guqin again.

Another famous anecdote pertains to the birth of the masterpiece “Plum Blossoms” (Meihua San Nong). The Eastern Jin poet Wang Ziyou was travelling by boat one day, when he heard that renown flutist Heng Yi happened to be visiting the shores he was passing. Despite his inferior social status to the court musician, the poet sends for him, imploring for a performance. Heng Yi, equally nonplussed about social status, answered his call. Standing outside Wang’s boat, he played the said piece, and then left. Wang in return, departed on his separate ways. The two never spoke a word to each other but nevertheless understood each other perfectly through music.

Wei Wuxian and Lan Wangji develop a very similar kind of intimate connection in The Untamed, to the extent that when the whole world turns against Wei, Lan keeps his trust, and sixteen years later, when Wei returns to the world of the living in another body, Lan’s love for his zhiyin is all the stronger, this time actively standing by him in opposition to his own clan.

The Chinese word for this kind of union of mind and spirit, as demonstrated between the Wangxian duo (as they’ve come to be known over the internet), is 知音 (zhī yīn), literally someone who understands one’s music. The unlikely pair not only understand each other well, but weather many calamities together by the perfect union of their music, taming a hoard of kuilei in the Pit of Corpses, and calming Wen Ning, when the Ghost General goes berserk during the final stage of regaining his spirit consciousness. Furthermore, they hold an unspoken bond through music, even after 16 years, Lan senses Wei’s presence upon hearing a snippet of the song Wei had composed for him.

Today, the word zhiyin is part of everyday speech, not as common as pengyou (friend) or shuren (acquaintance). It’s no longer specifically attached to the arts, but retains the idea of intimate mutual mental and spiritual understanding and appreciation. Zhiyin culture pervades Chinese society and continues to inspire artists and writers, with songs and sculptures exploring this state of mind, inspiring magazines and radio stations to borrow its name.

Compared to zhixin (知心, zhī xīn), someone that knows your heart, zhiji (知己, zhī ji), someone that knows you as they know themselves, zhiyin refers to a bond that is more based on intellect, common interests, shared outlooks. The Chinese have many words for platonic relationships, these are just a few. Historically, zhiyin have tended to be people of the same gender, which brings queer potential to the dynamic. This is sometimes explored in the nooks and crannies of classical literature, and more amply demonstrated in the MDZS story.

In part two, I’ll be talking about the purifying effect of music, as seen in The Untamed.