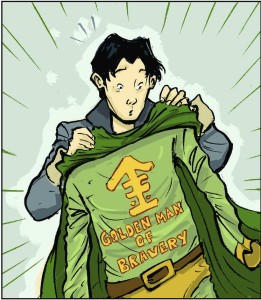 Whilst one of the remits of this site, and my goal is to translate and promote first time or struggling Chinese writers and artist, I was so impressed by Gene Luen Yang ‘s “The Shadow Hero”, that I couldn’t help writing a short review.

With art by Sonny Liew and lettering by Janice Chiang, “The Shadow Hero” is set in the early 20th century, when the ancient spirits of China grow disillusioned at the fall of the Qing Dynasty, and decide to seek further afield for worthy hosts. In the fictional American city of San Incendio, we meet Hank Chu. Descended from Chinese immigrant parents, he is content to help out in the family grocery store, “Yu Quai” (Jade Turtle) in Chinatown. His formidable, highly-strung and ambitious mother however, has very different ideas for his future. Like every good Chinese boy Hank is anxious to please his mother, but remains nonplussed until Mock Beak, the leader of the local Triad, beats his father for not paying the ever-increasing “protection” money. When Hank finally takes his destiny in his hands as a vigilante, the Green Turtle, he seeks out the mysterious overlord Ten Grand, meets his beautiful and deadly daughters, and discovers his guardian angel turtle.

The art is reminiscent of 1930s Chinese satire Lian Huan Hua, especially the occasional exaggerated, almost parodyed faces. The lines and the muted colour palette create an idea ink wash paintings, whilst the detailed backdrops combine Chinese hoardings and interiors with Art Deco American architecture. Whilst many comics “white wash” their Chinese characters, either giving them chalky pale skin or impossibly round and large eyes, this comic leaves no room to ignore the characters’ origins. The brush stroke lines are full of movement and vitality, their slight curves, their angularity all serve to perfectly compliment the characters’ ivory skin tones, very defined facial bone structures and delicate features, including the epicanthal fold that gives Chinese eyes their unique shape. Unifying these with the bright iconic “WHAM!”, “BAMM!” effects of Golden Age American comics, and the darker, moodier atmospheres of gritty 90s cityscapes and Liew has certainly created a unique comic art style for Chinese stories.

“The Shadow Hero” is without doubt, a Chinese style superhero story. Whilst you may ask if traditional Chinese values, such as social conformity, staying out of trouble and obeying one’s seniors, sits comfortably with the idea of a superhero story, Yang’s writing brilliantly merges these, complete with backstories of strife, an old roadside carver who’s really a kungfu master in disguise and the intervention of powerful ancient spirits. Hank’s mother’s antics had me in fits of laughter. The turtle, along with the dragon, the phoenix and the qilin, are considered the four protective spirits of China. It’s a symbol of peace, longevity and good fortune. The mysterious patterns on its shell are thought to contain the secrets of heaven and earth. The fact that Hank is associated with the slightly lumpun turtle rather than the customary dragon or phoenix, piques the readers’ interest and indicates an unusual story.

The title “The Shadow Hero” is a tribute to Chu Hing, one of the first Asian artists to work in the American comics industry. With the birth of the comic format in the1940s, publishers all over America were caught in a frenzy creating and selling. At a little known publisher called Rural Home, Chu created a World War II Chinese superhero called The Green Turtle, as part of their “Blazing Comics” series. Hing had intended his superhero to be Chinese but his publisher vetoed the idea, citing sales as a reason. The Green Turtle was published, but with the hero always drawn with facing away, or if his front was in view, something would always obscure his face. Dialogue discussing his origins were always interrupted, and fight scenes would always occur obscured by shadows. The Green Turtle would always save the day, but his identity remained constantly hidden. The history and samples of the original comics are part of the extras at the back of the book. Definitely worth taking a look.

Today, Liew, Yang and First Second comics have not only channeled the spirit of Chu Hing but also that of the turtle spirit across the centuries. They have revived the Green Turtle and made him the Chinese superhero that Hing would have wanted. There are still two ancient spirits, yet to reveal themselves in America, the phoenix and the tiger. Will Hank encounter Ten Grand and the dragon spirit again? I can barely wait for volume 2 of “The Shadow Hero”.