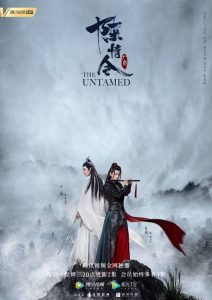 In part one of my article on Chinese philosophies of music as explored in The Untamed, I looked at the role of music in cultivation and zhiyin culture. In the second part, I’ll be discussing concepts surrounding music as a way of healing, and in extending this further, as a form of kungfu.

Throughout The Untamed, we witness the healing properties of music, particularly, after the great battle against the Wen Clan and Wei Wuxian is critically injured. Lan Wangji plays the guqin for him, daily while his sleeps, and during regular meditations after he wakes, for further healing; the same thing that Jin Guangyao purports to do for Nie Mingyue, head of the Nie Clan, by playing him the Song of Clarity. Traditionally, the Chinese believe that music has the power to xiuxin yangshen, cultivate the mind and nurture the spirit. Well-known for his wisdom in statecraft, the sage Confucius had also taught his students of music’s ability to purify the soul, elevate the mental realm, and is therefore instrumental in keeping order in society.

In China’s traditional medicinal and cosmological theory, five organs of the body respond to the Wuyin, the five diao, musical modes. These in turn, correspond with the five elements. 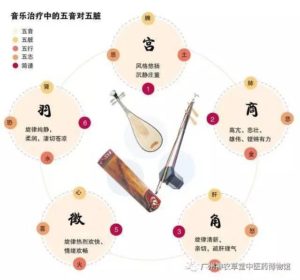 TCM seeks the balance in the flow of Qi and these five elements within the body. If getting ill or injured depletes any of these elements or throws them out of balance, then healing with the appropriate kind of music would replenish the body and restore its balance.

The way music can heal, means that it could also be used to harm, and we see this in action as the story unfolds in The Untamed. During a session of Empathy with the decapitated head of Chifeng Zun (Nie Mingjue) in Jin Guanyao’s secret chamber’s, Wei Ying discovers that Jin had adapted the mind-calming Song of Clarity by blending into it a piece from the Luanpochao (Collection of Turmoil) he stole from the Lan Clan’s Forbidden Chamber, which, when played with spiritual powers applied, can “weaken the body, irritate the mind, agitate the spirit, or shut the senses”, even take another’s life when the player’s spiritual powers are great. Instead of easing the impact of the harassing blade spirit, Jin torments Nie’s mind and spirit over a period of months, until one day, in a moment of fury, he succumbs.

If music has such power to harm as well as heal, it follows that it could be used as a weapon, and there would be a form of music-based kungfu. After he loses his golden core, Wei Wuxian is thrown into the Pit of Corpses by the Wen Zhao and left for dead. He survives by developing the Modao techniques of manipulating the supernatural, the music with which he summons ghosts and spirits of the dead to do his bidding, is strange and eerie, as opposed to music like the Song of Clarity, which sounds bright and pure. These techniques are forbidden because they subject the practitioner to the constant risk of succumbing to dark energies and forces of chaos.

Wei’s not the only one with a talent for music and penchant for the forbidden arts. In order to get rid of his older half-brother Jin Zixuan and become the future leader of the Jin Clan, Jin Guangyao persuades the latter to intervene at the fight between their other brother Jin Zixun and Wei Wuxian at Qiongqi Way, while planting his accomplice Song Lan in hiding nearby, to play soul-disturbing music on the flute while Wei is using his to control Wen Ning in combat, sending Wen berserk and making it look like Wei had lost control. Again, when all the clans end up gathered in the Pit of Corpses and fighting countless kueilei, Song plays a piece of guqin music that is well-known to Lan Clan xiushi, subtly altered to seem like he’s making errors, but actually modified and made to do harm, thus temporarily removing all spiritual powers from the xiushi, midst battle.

“Music can exorcise evil, so why could it not also summon it?” muses Wei to a cave full of stunned cultivators

Of course, music is traditionally cultivated as a source for good. Whilst traditional culture recognises the impact of music on the mind and spirit, Chinese fantasy takes this to another level, frequently featuring music as a powerful weapon. In one of the many memorable encounters between the pilgrims and demons in Journey to the West, the scorpion demon strums strange music from her piba to confuse and paralyse the monk Xuanzang, whom she lures into her cave, so she could consume his flesh and become immortal. The Ruanqin or Piba are also the weapons of one of the Four Heavenly Kings, which he plays in their attempt to capture the Monkey King after he gatecrashes the celestial Pantao Banquet.

In The Untamed, music-based cultivation is the greatest strength of the Lan Clan, known for their scholarship, their purity of conduct, and adherence to a million rules. The ultimate spiritual tools of two of the leaders, Lan Xichen and Lan Wangji, are both musical instruments, the xiao and guqin. One of the secret techniques of the Lan Clan is the Pozhangyin, which employs music to exorcise evil or supernatural forces, one that can be grasped most profoundly via the guqin. Throughout the story, we have seen Lan Zhan save the day with this instrument many times, from capturing three very powerful kueilei at the Mo Clan at the beginning of story, to teaming up with Wei Ying’s flute to calm Wen Ning when he wakes from the dead, and later with his brother’s xiao to eventually tame the extremely blood thirsty knife spirit of the deceased Chi Fengzun in the Guanyin temple, after it had caused Liafeng Zun (Jin Guangyao)’s arm to be lobbed off and could barely be held back inches away from Jin Ling’s face.

In fact the guqin is a very common ultimate spiritual tool in Chinese fantasy, whether in Xianxia, Wuxia, Xuanhuan or Qihuan, as well as in online role-playing games, usually summoned at will by scholarly, aloof male characters of high spiritual power, often with long flowing silver hair. Even today, Wuyin Wellbeing is a recognised traditional medicinal practice, and guqin classes are popular in China, as are booking professional players to play for oneself as a form of mindfulness therapy, and drinking tea whilst listening to guqin music.