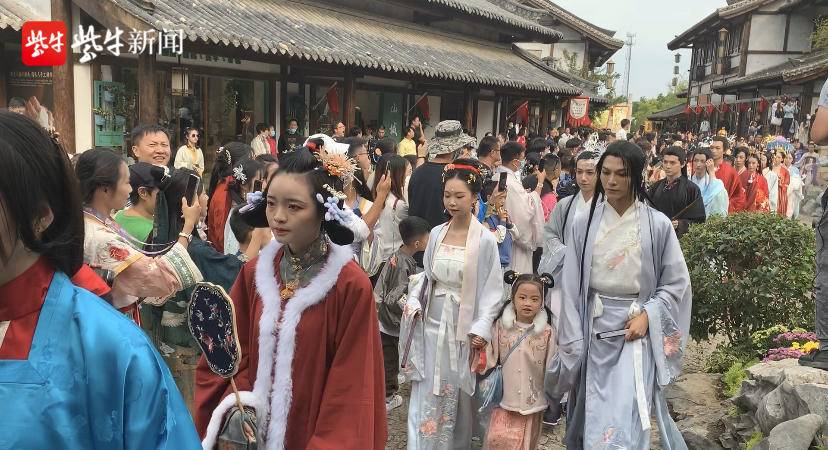 The National Day celebrations of 2021’s Golden Week has been a celebratory extravaganza of traditional culture. A substantial part of this was the showcasing of dozens of hanfu brands, not to mention the performers, from musicians to martial artists, all looking their best in traditional clothes. Over the last decade or so, hanfu has come to somewhat replace the cheongsam as representation of national clothing. The rise in and diversification of output to cater to festivals, fashion events, cosplay, and a general rise in popularity after hundreds of MMORPG and streamed historical and fantasy dramas, mean that hanfu is now more of greater appeal and more available to the general public than any other modern times. In this article, I’ll talk about the essentials garments of traditional clothing. 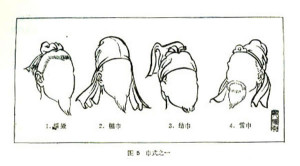 The concept of hats came into being in China after the Han Dynasty. Upon reaching the age of 20, men from the nobility donned the guan, not so much a hat as a vessel for housing one’s hair. The hair was arranged into a ji (bun) on the top of the head, the guan placed over it, and secured with ying (silk strings) on either side, tied together under the chin. A jizan (hair pin), usually made of bone or ivory, and adorned with gems, was inserted across the middle of the guan to keep the ji in place.

Variations of this style of headdress include wrapping the bun in a piece of cloth before placing the guan over it, or the bian, which is made of leather, or the mian, which comes with dangling pieces of jade ornamentation, reserved for the highest aristocracy. 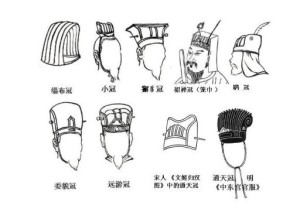 The guan wasn’t worn by children, commoners, or ethnic minorities. Commoners wore the ze, head banners arranged in variaous styles, including the motou, tied at the front and above the head, putou, tied at the back of the head with the cloth split into two tails, which later evolved into the wusha (black gauze) hat worn by officials.

Women tended to dress their hair elaborately rather than wear hats. Noble women wore the feng (phoenix) guan, ceremonial headdresses embroidered with pheasants and phoenixes. During the Ming Dynasty, these were worn only by women of the imperial household, whilst those of official rank wore a variation adorned with pearls, pheasants and flower-shaped hair pins. Not to be confused with headdresses of civilian women in later periods during wedding ceremonies, which also came to be referred to as fengguan. This type is still worn today by women who opt for the traditional style wedding. Children wore colourful cotton hats made in the shape of animals that expressed wishes of good luck and good health. 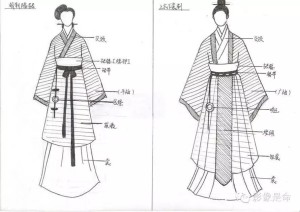 Traditionally, the Chinese gentry wore long robes that reached the ankles, over undergarments, the zhongyi. Shorter garments, the ru, came down only to the knees and were worn by commoners. Robes could have one or two layers, the single-layered chan, or double-layered xia, padding would be inserted between the two layers for extra warmth in winter.

There are two styles of ren, traditional collars, zhiling, collars that meet in the middle, worn on leisurely occasions; jiaoling, cross collars, left half crossing over the right half, knotted under the right armpit, youren. People who crossed their collars the other way, zuoren, were the deceased dressed for funerals, tribesmen of different ethnicity, or later, rebels and non-conformers.

Sleeves of traditional robes are long and wide, covering the hands when they are down. Guangxiu or daxiu (wide sleeves) can be a useful place for storing, or concealing items, equally handy as an acting prop on stage to express different emotions. There are numerous Chinese literary terms describing different ways the sleeves move, that can denote different moods, or states of mind.

These loose robes are tied around the waist with sashes. There are two types of sashes worn together, dadai, for the purpose of securing one’s robe, and gedai, for holding pendants and other ornaments, which is tied around and over the dadai. The dadai should be secured around the abdomen, knotted at the front centre and the remaining length hang down naturally. A coded system of colours distinguished were used to distinguish between stations.

There is a longer section at the back of both women’s and men’s robe, which can sometimes trail the over the floor, called the jü. Apart from being good for grabbing for dramatic effect, the light, graceful and flowing appearance of the jü has been eulogized in many works of literature.

Only the wealthy could afford garments made of leather, wool cloth or bo (woven silk). The poor wore hand-woven clothes made out of jie, coarse fibres such as hemp and various kinds of animal hair. Robes of cloth woven from jie, of a finer texture than the rough materials themselves, were often adopted by poor scholars. 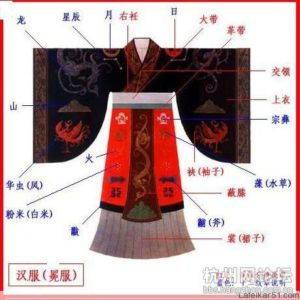 The outer lower garment, the xiashang, looks essentially like a long skirt, and usually has three panels at the front and four at the back. Trousers, as we know it today were rarely worn. The kua, worn under the xiashang, from the Ming Dynasty onwards, had two leg holes, like modern trousers, but no crotch. The rich could afford Kua made of silk. A shorter version made of coarse material, the qingkua, were worn by the poor.

A popular ornamental lower garment, worn over the xiashang, is the bixi, which resembles a very narrow apron. As its name suggests, it reaches down just over the knees and hangs from the dadai sash.

What I have talked about here today in the very limited scope of this short piece, is traditional clothing of the Han people only. I hope you found this article interesting and will be pleased to be recognising the various parts of robes worn when you next watch your current C Drama series, and perhaps even be inspired order a hanfu you like the look of, or put together a cosplay of your favourite character from a historical fantasy RPG. There are no buttons, only ties and sashes. Fortunately, handy tutorials from Douyin and Bilibili are there to show you how to put these gorgeous garments on.

This article has been written with thanks to “Ancient Chinese Culture”, by Ma Hanlin, ed. Wang Li, Shijie Publishing.