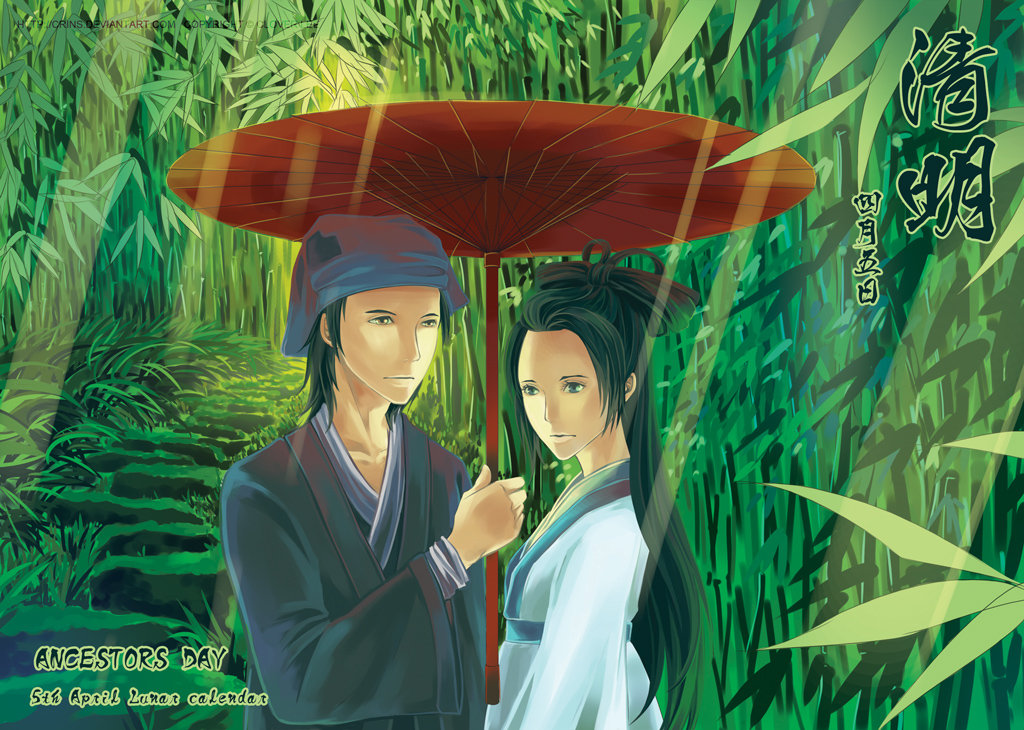 清明 Qing Ming Festival originated about 2500 years ago in the Zhou Dynasty. It takes the name of a season in the third month of the Chinese agricultural calendar, the season of seed sowing and spring ploughing, when the sky is clear and the air is bright, as indicated by its name.  Apart from being an important agricultural season, Qing Ming is also China’s festival of the dead, and a national holiday. Here I outline some traditions observed during the festival. Just so you don’t get bored I am enlivening them with some personal experiences.

Qing Ming came to be associated and later combined with 寒食节 Cold Food Festival, which falls on the day before Qing Ming and commemorates 介子推 Jie Zi Tui, the legendary loyal courtier from the Jin Kingdom during Warring States era, who is said to have once cut off flesh from his own leg to save his prince-in-exile from starvation. He was forgotten after prince Zhong Er returned to power, burned to death and his corpse found by a willow tree. On this day, people wear willow branches to remember Jie Zi Tui and only eat cold food, in the north cakes made of dates and wheat, in the south sugared lotus root and glutinous rice.

As you probably know there are many, many martyrs in China, whose tombs and memorials are also cleaned during Qing Ming. At primary school in Guangzhou, I remember going to Martyr’s Park near Peasant Movement Institute, with fellow pupils and brooms. I also remember going to a remote cemetery to visit my Cantonese grandfather’s grave, which was a traditional curved one that always reminded me of armchairs. Picking some lovely bluebells nearby, I saw a clumpy white substance clinging to the roots. No wonder the bluebells were growing so lusciously.

– also referred to as 探春，寻春 or Spring Seeking. This is a time when spring has returned, people go outdoors, step on the grass, appreciate nature and celebrate spring.

As a child in Guangzhou, I really liked Qing Ming. It was almost always sunny on that day, and it meant that instead of sitting in class we got to go to the park for an entire day (back then, we had to go to school on Saturdays as well). Also Cold Food Festival, it was an ideal day for picnics, the tea eggs, pork sausages and rice cakes in our lunch boxes tasted especially good.

– what I was talking about before. Some say that the willow tree that burnt to a crisp with Jie Zi Tui, later came back to life. So you could also call this Zombie Willow Day! Another of the dead who is remembered on this day is 神农  or Shen Nong, the ancient father of Chinese agriculture who invented hundreds of farming tools.

– it is strongly believed that wearing willow branches at this time can ward off bad luck and evil, so they are carried by hand, placed on doors, hung from roofs, even woven into hats. Where there’s willow there’s a way!

– aka 拔河 , the name says a lot about the origin. During the Spring and Autumn Period, the kingdom of Chu strengthened its soldiers and readied them for war with this game. Nowadays, it’s all part of taking advantage of the lovely spring weather to keep fit and increase resilience to diseases.

– the ancient Chinese believed that if one flies a kite in the sky, cuts the string and lets it fly away, then all one’s illness and bad luck will also fly away with it, so it’s not only a game, but a kind of magic, if you believe!

– swings or Qiu Qian, used to be called Qian Qiu, literally meaning “thousands of autumns” or “centuries”. For the Chinese, they express a wish for longevity. Swings became popular during as the Northern and Southern Dynasties, originally they were simply a rope that one would hold on to and swing about. From the Yuan to the Qing Dynasties, Qing Ming was also called Swing Festival.

My mother came to the nursery to pick me up on Qing Ming, while she was talking to the teacher I stole off to have another go on the swing. Standing on the seat I swung to giddying heights. There was a thump and all was black. I woke up in the sick room. Apparently I had flown off the swing, been hit by it and fallen to the ground with a great big gash on my forehead. Luckily someone was passing by and rushed me to the nurse. I had a few stitches and lived to tell the tale! Not the way I’d have chosen to get rid of bad luck!

– a predecessor of football that originated in the Shang Dynasty and became widespread the Spring and Autumn era. The ball is made of leather and stuffed with fur. Cu Ju started off as a competitive sport but became a performing art and lost its edge as a sport. Recently Cu Ju has had a revival in Shan Dong, where it all started. I wonder how many football matches are on today.

– a old custom of certain villages in Shaanxi, activities to welcome the god of silkworms include lanterns, martial arts, boat races and dragon dances.

– no longer much practiced but Tang emperor Xuanzong was a fan.

– an archery game, the Ming Dynasty version involved not shooting willow but the gourd that contains a pigeon, which is hung on the willow tree. The aim is to shoot the gourd without killing the pigeon, the one who startles the poor pigeon most and makes it fly to the greatest height wins.