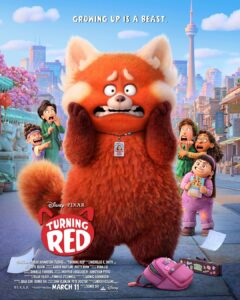 There is something special about seeing yourself on the big screen, and if not yourself, then someone who you can see yourself as, or recognise yourself in. This is one reason why Pixar’s Turning Red has been such a big thing, especially when it looked as though the studio would sooner do another movie following Bugs’ Lives, than putting an East-Asian in the protagonists driving seat.

Now, I’ve never been a ‘Disney kid’, so I was still cautious as I sat down to watch the film, having been stung twice by the mouse’s Mulan. But… I was charmed, enthralled, and thoroughly entertained by the story, and of course, characters who looked like me.

I could probably have sat and gushed about it for a good hour or so as the closing credits ran, but I gave myself a very deliberate time to breathe and digest, so here is what remains. This will probably still seem a little like outpouring, and will certainly contain spoilers, so you should watch the film before reading this.

Turning Red (directed by Domee Shi, with story and screenplay by Shi, Julia Cho, Sarah Streicher) tells the story of Meilin (voiced by Rosalie Chiang), a “good little” Canadian born Chinese girl who has to come to terms with adulthood and independence, writ large through a family curse, where emotional outbursts see her turning into an oversized red panda.

Now, the adolescent awakening of curses/powers is not new, and it has been pointed out to me that Turning Red takes some heavy inspiration from cult classics like Teen Wolf. However, this doesn’t detract from the message. Especially in Chinese led storytelling, the exploration of sexual awakening of a young girl, in a healthy and open way, is a breath of fresh air. Even though we are all cringing along with Mei as her fantasy drawings of the “cool” older teen are found by her mother, we see a much more important subject being broached, the taboo of sex. The extreme prudishness around sexuality in any form, has exacerbated many social issues.

I was going to write here about how it is so troublesome, particularly in Chinese society, but.
Well.
It’s not just the Chinese is it?

There has been a huge backlash against this film for being “smutty” and “inappropriate” for showing a young girl interested in boys, and daring to talk about reproductive health. Specifically. Periods.

If you are squeamish about the subject.. buck up. It happens, though…it doesn’t actually happen in the film. Meilin’s mother thinks it’s happening, and overreacts, leading to an incident that makes the real “curse” come out in the middle of her classroom, but Meilin does not experience “the red peony blooming” as her mother euphemistically calls it. But the awkwardness, need to be extra careful, the feeling gross and stinky and just generally.. the “redness” of her curse, means that we all know exactly what the metaphor is.  It’s this physical thing that you are stuck with for your adult life that marks you out as adult, though usually way before you are ever considered that way by society. Welcome to the limbo of redefining yourself.

The curse Meilin actually wakes up with, is a familial one. And is multifaceted. The film makes no bones about bringing out the fierceness at the heart of the panda, as well as the cuteness. The Chinese for panda is xióng māo, literally “bear cat”. And that ferocity, and cuteness are both explored through the film. We see Mei capitalise on the adorable fluffiness of the Pixar-perfect panda, as well as the aggression which is unleashed when she is pushed too far, and we hear of the darkness and danger in the Panda spirit, which has already affected her mother’s relationship with her own parents.

We hear of the curse’s origin, as a mother’s wish to protect her children during war time, and this is recounted in a distinctly differing animation style, showing the deification of the Lee family ancestor, Sun Yi. It is a nice nod to Chinese screen productions in general, where beautiful traditional art style animation is often inserted during the flashback, or historical recounting. The design of Sun Yi is visually perfect, in appearance and demeanour, she resembles one of the deity statues so often found in Chinese temples. 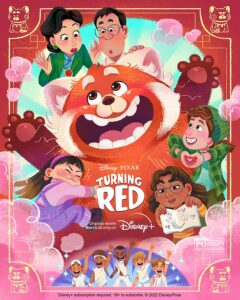 Art by Hana Augustine, from @PixarTurningRed

Those visual notes do not stop with the Panda, or the Lee family temple. I never expected to see a mystical scene in a bamboo forest, or characters leaping in that fashion across rooftops, in a western, modern-set movie. Those tropes have always belonged to Chinese heroic narratives, so imagine my excitement when I saw both. Of course, where else would panda spirits roam free, except in a bamboo forest? Having all of this mixing highlights yet another of Mei’s struggles of redefinition. She lives in a Chinese quarter of Toronto, in a Chinese household, with Chinese duties, but is also part of a western country, with diverse, but western friends, who see much of her reaction to responsibility as being “brainwashed”. Even in the mysticism, the depictions of the separation of the panda and human selves are portrayed in a halfway house between Western magical mirror division and the Eastern ethereal as the spirit leaves the body.

The “Chineseness” in this film, (another thing some netizens of the West seem to take umbrage with), is baked into every small aspect of the film, and proper representation of othered cultures often lies in these small details and nuances, which show clear understanding of said culture. One of the ones that particularly resonated with me is watching CDrama together. Apart from meals, this is another major time where bonding happens, whether it’s between friends or family. The film taps into the now global appreciation of CDrama, by painting its predominantly ‘90s R & B soundtrack, with a few brushstrokes of traditional style instrumental music during the few moments of high dramatic tensions, highlighting those emotions with the pathos of er’hu strings or undulating zither sounds. The portrayal of Mr Gao, shows an understanding of the traditional role of the village Daoist priest, one that resides within the community they serve in daily rites, such as births, marriages, burials, and of course, exorcisms.

The stellar voice cast of East-Asian actors, who speak from a place of personal understanding only adds to the reality of the film (if any animation with a giant read talking panda can evoke “realness”). Veteran actor James Hong’s voice comes unannounced, and welcomely from the Daoist priest, and Wai Ching Ho, who has been having a stunning career alternating between grandmas and steely poised madams, lends perfection to the iron-willed Matriach of the Lee family. Rosalie Chiang and Sandra Oh are excellent as the strong-willed, fallible and lovable protagonist and her strong-willed, impeccable mother (Ming), both of whom descend into their own personal frenzied meltdowns.

As the film reaches its conclusion, and we are treated to a veritable army of pandas. It warmed me to see Grandma and the squad of ‘aunties’ Panda spirits sealed in objects such as hairpins and bracelets, all objects of high emotional symbolism in traditional culture. I was thrilled to see Grandma breaking her bracelet to release her panda, because it really was so deeply routed in the tradition of jade jewellery.  Jade is considered to possess the power to ward off evil, when a jade bracelet shatters, ill luck is supposed to have been expunged.

Whilst Turing Red has Meilin’s duality at its core, the film takes care to demonstrate the diversity that naturally surrounds her in Toronto, whether it’s in Meilin’s group of BFFs (Miriam, Abby and Priya), among the students and staff of her school, even in the manufactured boyband 4Town, with mixed ethnicities in the voice casting to match. Domee Shi has gone to incredible length to make the world of Turning Red seem inclusive and safe, whilst also allowing enough sheer terror and dread that exists in the eyes of a thirteen year old girl.

There’s something that every East Asian or diaspora viewer will need to talk about, when a new film comes out that’s “about them”, and that’s the representation of family. Like me, many of you were probably nodding in recognition at scenes of overfeeding, the overbearing parents, the garrulous ‘aunty’ figures, food as a language of love… and, as in many families across Southern and Eastern China, the formidable ever-looming mother. It’s amazing how UN-surprising their transformation into a Godzilla-size giant storming across the city, actually was.

The conclusion though, the mothers acceptance of Meilin’s interests, her friends, and her choices… makes Turning Red as much of a fantasy fulfilment as any superhero film. Meilin has used her Panda powers to become financially independent, gain self-determination, spend time unvetted with her friends… In many ways, this is a Chinese diaspora family wish fulfilment story, where the problematic parent ultimately comes to support the grown up offspring, even though their decisions fundamentally deviate from expectations.

Turning Red has left me with some indelible images, such as Mei’s teen crush boyband joining voices with the mind calming Cantonese chant to try and contain Ming’s panda spirit, and the scene where Meilin finally connects with her ancestor, as they fly up to the moon, not only holding hands humanely, but bumping noses as bears do. Sun Yi turns into her panda form whilst still wearing her hanfu robes and sash. It is Pixar-Chinese culture cross pollination to perfection. Whilst I love the fact that I have seen a film where I can see so much of myself, my friends, and my culture on screen, it swells my heart so much more that, so can everybody else.