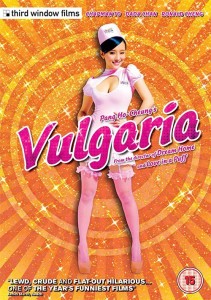 To Wai Cheung is a failing producer, unable to pay the alimony to his bitter ex-wife, or hire competent staff, or even keep his office to himself. With the help of his long-term buddy, To approaches a potential mainland investor, a Guangxi triad gangster named Tyrannosaurus, with very, particular, tastes in food and sex.  Tyrannosaurus’ dream film is a remake of a classic porn movie starring his childhood idol Yum Yum Shaw, now approaching 80. Driven by his love of film and his young daughter’s desire to see him on TV, just what would To be prepared to do to make a film?

The central messages – To’s devotion to film making and commitment to his work as a film producer, the true love he finds with Popping Candy, the female lead aptly named for her oral skills, are anything but vulgar. The film touches on the hazards for overseas Chinese working in China with insufficient understanding of the diverse local colloquialisms and slang, and on the strait-laced, pressurised attitude to life adopted by many in China represented in the character of To’s ex-wife, and our hero makes an eloquent case for the alternative lifestyle.

A film about a film is nothing new,  but vulgaria plays with the whole post-modern toybox, breaking the 4th fourth wall as To addresses the audience directly, chiding us from the beginning for being late into the cinema, as well as issuing pre-show extreme content warnings to fan up excitement and anticipation as did William Castle, Alfred Hitchcock and the Shaw Brothers. Shaw studios are frequently mentioned, as a gold standard for Chinese cinema. The cameo from the still beautiful, but unfortunately no longer sexy Susan “Yum Yum” Shaw, as she is persuaded into returning to erotic cinema, cements their legacy.

Is Vulgaria as a metaphor for the film making industry, or just an exercise in squeezing as many dick jokes into a tight hour and a half? Either way, it is a hilarious, very entertaining movie that pushes itself to the edge of good taste, before somersaulting off the edge. If gross-out romps like The Hangover are what you’re into, then as To says,  “What happens in Vegas, stays in Vegas. What happens in Guangxi……” Well, watch it and find out.

Vulgaria is released in the UK on DVD and Blu-Ray by Third Window Films, on the 15th of April.