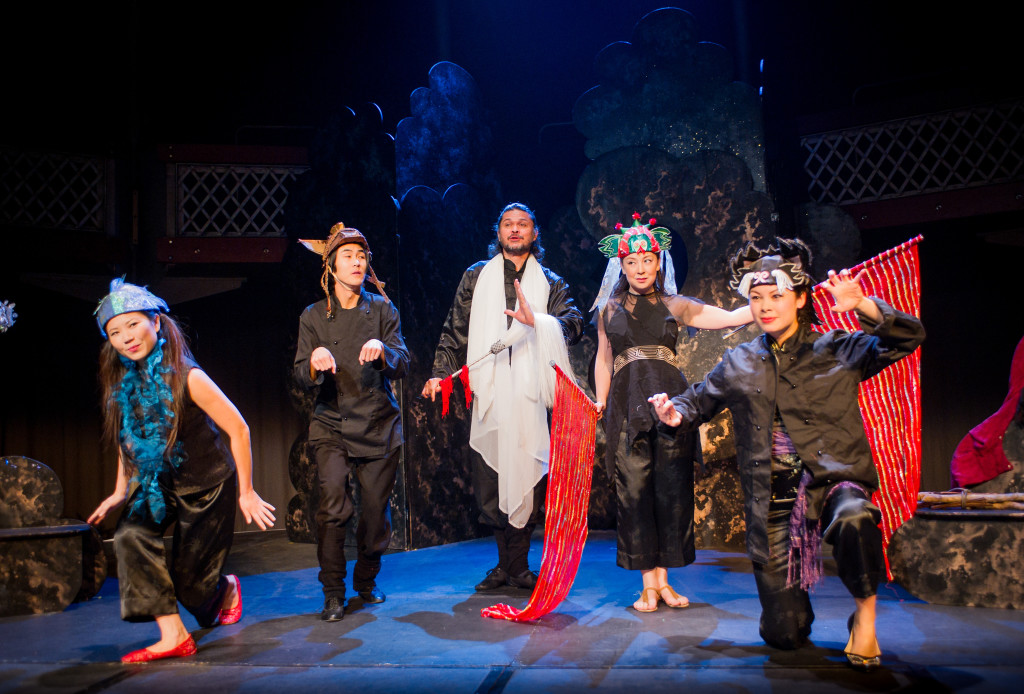 There are some stories which just spring up time and time again, from culture to culture. Certain fears and hopes in the human Psyche that show we’re all basically the same. “Yeh Shen” is one of these, or maybe it’s several, as the Yellow Earth Theatre draws many comparisons in their publicity, and even in the play’s opening scenes, to Cinderella, and proudly announcing that this Chinese fairy tale is the oldest recorded version of the story.

The story takes place in an ancient Chinese village where a young orphan, Yeh Shen (Kerry Gooderson), lives with her father’s second wife, her step mother Lu-Man (Anna Leong Brophy) and step sister Jun-Li (Rebecca Yeo). Suffering the full “Cinderella treatment”, our heroine is cast out to live in a cave (charmingly represented by painted screens), serving Lu-Man and Jun-Li like the lowliest of servants, while her only friend, a fish, is fatally preyed upon by the family cat Mao. Instead of the royal ball, Village Elder Peng holds a Spring Festival celebration in the village square, which all eligible young ladies of the village consider as an occasion to find their prospective suitors.

The celebration occurs, Yeh Shen attends, against her step mother’s wishes, clothed in spectacular silks by the spirit of her poor departed fish friend, and has to leave suddenly, leaving a golden slipper (which had been too tight for her anyway).

The plot takes an unexpected twist from both its western counterpart, and most traditional tellings, as Jun Lislips into the golden slipper and gets to marry the King of Tohan. Yeh Shen instead falls for the nomadic horse merchant Chen-Bei (Chris Chan) , whose injured foot she helps to nurse. The eventual fates of the two sisters are well deserved, and follow the well trod road of fairy tale morality, but this dissent from expected story leads to a fun finale, as our heroes make a desperate bid for freedom. 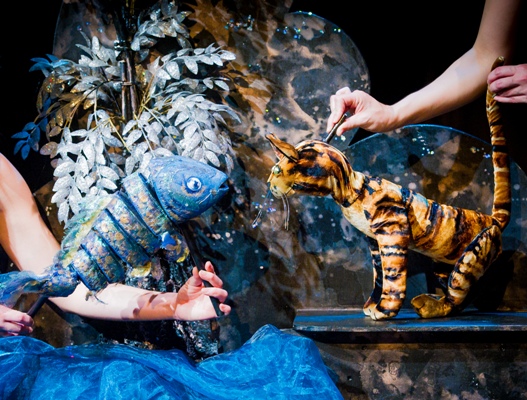 The whole play is presented and set to Chinese opera style musical accompaniment, which alternates with dialogue, emphasizing meaning and bringing out the tension and suspense. The wonderful Zhenghui Qiu provides all this from a foley table of traditional Chinese percussion, string and wind instruments, whilst also fulfilling a few minor roles here and there.  The minimalist stage set and costumes render a highly immersive focus and a magical, almost otherworldly atmosphere. Drawing from Bunraku and shadow puppetry, alongside Chinese opera,  the piece is economical, but invites the imagination to participate.

Strictly speaking, it’s not until Yuan Xiao Festival, which marks the end of Spring Festival, that Chinese valentine’s takes place, but the simplification is forgiveable. Script, choreography, and even tiny details such as the use of traditional children’s animal hats in the costumes, all relay a respect for the culture behind the story.

Some elements may be a whistlestop tour of chinoiserie, the king’s tiny-foot obsession, the appearance of ancestral spirits, and the use of colourful flutter fans, moves from northern Han and Mongolian folk dances, but it’s all safely magnetic for the younger audience.

Other cultural elements enrich the play’s subtext, finding common ground between  British and Chinese flavours, helping the audience relate to this tale from a faraway land. Yeh Shen’s mantra of  “dignity, determination and carry on no matter what” may be Chinese stoicism in a nut shell, but it’s not a million miles from “Keep Calm and Carry On”, and Brophy’s take on the Merchant is a successful transition of cross-cultural archetypes, taking queues from George Cole’s Flash Harry. Regency dance styles mixed in with Chinese folk styles in the Spring Festival dances also blur the boundaries between Chinese and European courts.

Each member of the small cast perform several roles, each wonderfully energetic and equally convincing inevery guise.  Brophy’s fantastically nasty Lu-Man seemed to coax the audience into amusement at this cardboard cut-out villain, Ashley Alymann plays the upright ancestral spirit well, but also the exasperated General with great comedy. Chris Chan provides the most amazing vocal effect and puppetry for Mao, bringing it to life with every movement, from his leaps and stretches, to the subtle rise and fall of the body as it sleeps.

Pantomime aspects of the play are certainly present in the exaggerated acting and comic hilarity throughout, and although there’s not a lot of audience participation, the children were adorable in vocalising their enjoyment of the work. Whilst Director Kumiko Mendl had pitched this play, with its relatively long run time and complicated dialogue, for older children. The younger children seemed transfixed.

This show has an air  of the Christmas panto staged late, but I think it’s even more important as a Spring Festival piece. Whether enjoyed as a family outing, or a piece of contempory performance, “Yeh Shen” is a fantastic work of creative theatre that leaves one feeling entertained and celebratory at the end, offering up digestable elements of Chinese culture to wetted appetites. There’s even a dragon in it. The play tours a little before returning to London, at  The Polka Theatre, for Chinese New Year, before it continues around the country until 5th of April: