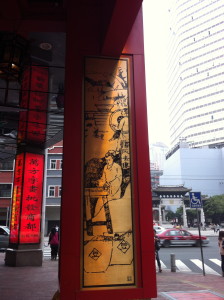 Amongst the many interesting cultural findings from my return to Guangzhou last year was 致美斋 or Zhimei Zhai, one of the four major soy sauce makers in China. Founded by the nobleman Liu Shou’An during the Qing Dynasty, Zhimei Zhai has been making soy sauce for over 400 years, surviving even the Cultural Revolution (during which it was briefly named “Forever For the People”), because let’s face it, everyone needs soy sauce no matter what.

Today Zhimei Zhai not only has its own soy sauce factory but numerous shops around the city, but has maintained its very first shop where the business was first founded in 1600, in all its traditional glory.

Thanks for the unique Cantonese street architecture of overhanging arcades to provide shelter from the sun and rain, the pillars outside the shop have been decorated with etchings in traditional style, showing how soy sauce was made, once upon a time.  I have translated the text on the etchings so I can share them with you.

Stage 2 Extracting the oil under sunlight

Stage 3 Winnowing impurities in the wind

Stage 5 Stirring until even with bamboo pole

Stage 6 Sieving and pouring into jars