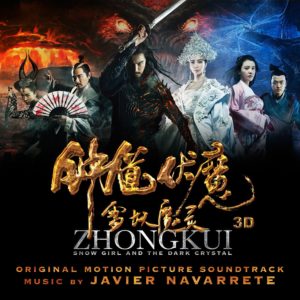 The Chinese Lunar calendar doesn’t always match up with ours, and our festivals hardly ever overlap. Whilst the West gets all its gruesome ghosts and ghouls taking centre stage at the end of October,  the biggest festival of the dead in China takes place half way through the seventh lunar month. This friday saw the end of Zhongyuan (or Ghost Month), and to celebrate, here’s a review of 2015’s big fantasy monster movie, released internationally (but not in the UK yet) in August.

Zhong Kui: Snow Girl and the Dark Crystal, directed by Peter Pau (Forbidden Kingdom, Bride with White Hair 1993) and Tianyu Zhao, starring Bingbing Li (Detective Dee and the Mystery of the Phantom Flame, Resident Evil: Retribution) and Kun Chen (Painted Skin, Mulan: the Rise of a Warrior); is set in the Tang Dynasty, in the city of Hu, during the time of the millennial reincarnation. A once-every-thousand-year alignment of full moon and Ghost Month when creatures from heaven, earth and and the underworld can cross realms. The entire city of Hu is in danger of demonic possession, and our hero, Zhong Kui, is sent by his master, a minor god named Zhang Daoxian, to steal the Dark Crystal, the cornerstone of the demon world.

Are you with me so far? Good. Because it’s about to get complicated.

To aid in his demon slaying and the protection of Hu, Master Zhang bestows a special fan on Zhong Kui, which, through an act of self mutilation, allows him to transform into a giant to go toe-to-toe with the demons. In the meantime, a travelling dance troupe of gorgeous girls arrive in town, including Zhong’s lover, Little Snow, who vanished without a trace three years ago. The lady, however, denies she knows Zhong, and treats him icily as they prepare for their show…

I am always very excited to see any original pop culture output from the mainland. And admit I give a lot of things bonus points for effort, which other reviewers and commentators may not, however, I have to admit that I am a little disappointed by this film.

Whilst this is a huge budget film, with elaborate costumes, big names, and an international crew, the quality of the computer generated graphics, used copiously through in the demon world and fight scenes, felt lifted from one of China’s deluge of MMORPGs. I kept expecting red numbers to flash above the demon and qilin’s heads during one particularly wooden action sequence.

The style of the demons jar with the rest of the film’s Eastern aesthetics. Little Snow, when a human, is a model of traditional Chinese gothic – ethereal in flowing white robes. When she takes on her demon form however (yes, because a beautiful girl doesn’t just show up at your village in a Wuxia movie without being a demon or a villain), she transforms into a crystalline figure, which you could be forgiven for assuming was a passed-on character design for Elsa.

This film lacks direction in both its story and artistic vein, the dozen of co-production companies listed in the opening credits shows the dangers of filmmaking by committee. Each of them have clearly wanted and made sure their idea was included in the movie, and the result is an overlong, overcomplicated clash of genres, with not enough time to properly forge plot or character.

There are obvious telltale signs that Snow Girl and the Dark Crystal is aimed for the international market, scored by Javier Naverrete (Pan’s Labyrinth, Wrath of Titans), it demonstrates strong design influences from Devilman, Resident Evil, its epic and battle settings clearly take inspiration from works such as Lord of the Rings, and classic Western fantasies like Legend, and of course, The Dark Crystal.

Amidst this hodgepodge of styles and tropes, it’s a relief that the makers of this film didn’t totally forget their roots, and have taken visual cues from earlier Chinese fantasy masters like Tsui Hark to construct their demon world, also from Zhang Ji Zhong’s 2011 TV series of Journey to the West, and classics such as Shaw Studios’ Cave of the Silken Web, in their portrayal of the alluring female demons. Even the effeminate albino villain makes an appearance, a character trope established in classic Wuxia films of the 1980s and 90s.

I am delighted to see contemporary Chinese works drawing from their rich heritage and making lesser-known legendary figures more accessible to the outside world. The character design of Zhong Kui is steeped in his folklore representation as a fierce demon-conquering god, with bushy eyebrows, a beard, wielding both a fan and a sword. The first demon battle we see has him fighting a nine-tailed fox demon, which is a rough and close-won scrap in a confined space, finishing with him walking out in slow motion, sword slung over his shoulder. The fade to black and white and the bombastic, near rock theme show a transition into pop culture not often seen in mainland cinema.

Accustomed to Chinese horror films like Chinese Ghost Story, and mainland TV staples inspired by Pu Songling’s ghost stories, I was pleased to see further development of established genres in this film. Star-crossed love between human and demon is one of China’s favourite fantasy horror tropes. Traditionally men who fall in love with female demons, are sensitive and frail scholars. Although Zhong Kui is also a scholar, he is strong, decisive and would go on to become a fearsome demon slayer. The comic sideshows from Zhong Kui’s feisty little sister and her henpecked finacee is a welcome off-set to the heavy plot, and characteristic of the sort of comedy elements that are becoming increasingly popular with domestic TV and movie audiences (thanks to the other part of the directorship, Tianyu Zhao). The film’s exploration of the Daoist belief that every living person has three souls and seven spirits (an important McGuffin for the film), is done with a touch of brilliance and humour, which sets the stage, without feeling like a trite explanation.

Suffice to say that Zhongkui: Snow Girl and the Dark Crystal suffers the typical issues with current mainland works of pop culture, a fledgling CG industry that has a lot of room for improvement, an over-reverence to foreign output, a mistaken sense of the need for some sort of homogenous ‘international style’ and a lack of confidence to draw on traditional influences. Nevertheless, it’s an entertaining watch, with subtle moments of humour, tenderness and action retaining your interest in spite of dodgy dog-headed demon girls.

Often, when commenting on Chinese pop culture, I feel like parent watching child, who’s now grown from a toddler to a teenager. This rather roughly constructed project, containing many elements that show talent, potential and capabilities, gives me hope that the industry IS moving in the right direction, and like a parent, I feel proud and confident that the child will improve. I am extremely glad that for Ghost Month 2015, I am able to share with you this new fantasy epic on the Chinese demon slayer Zhong Kui, rather than having to delve into my box of classic films, for that cheesy little number from 1994, “Chinese Ghost Buster”.