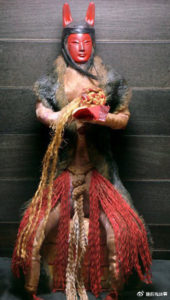 This week sees many gay and lesbian couples proudly walking up the isle as Taiwan becomes the first region in Asia to legalise same-sex marriages. Whilst my book “From Kuan Yin to Chairman Mao: An Essential Guide to Chinese Deities”, aims to show the depth and breath of native Chinese beliefs and their cultural significance, it’s by no means a definitive guide. One deity I didn’t get to write about in the book, is 兔兒神Tu Er Shen, the rabbit god, patron of homosexual love. This weekend is the perfect time to tell you a little bit about him.

One of the most popular origins of Tu Er Shen can be found in the 18th century text “The Indescribable”. Also known as Zi Bu Yu, or “What The Master Would Not Describe”, this collection of strange tales written by Qing scholar Yuan MuZhi, has been an inspiration for Manhua and Manga artists alike. The tale of the rabbit god tells the story of Hu TianBao, a native of Fu Jian, who became enamoured with the region’s new imperial anti-corruption officer. He would attend public hearings just to see the officer, follow him on all his rounds and even voyeuristically spy on him during his private moments. Eventually the officer noticed his stalker, and confronted Hu about his insolence. Hu confessed that he had fallen in love with the officer and although he knew it was sinful to have such thoughts for another man, could not forget his beauty. Furious, the officer drew his sword and slew Hu there and then.

Later, Hu appeared to his kinsmen in their dreams. He told them that after hearing the story of his death, the officials of the underworld were not cross with him, but granted him the title of the rabbit god, so he could look after the affairs of others like him in the living world. His kinsman built him a temple, which also became a sanctuary for homosexuals in the years to come.

The association of homosexuality with the rabbit has multiple provenances. One is a legend of the Jade Rabbit, the lunar medicine maker, who appeared to the people of a region ravaged by war. He gave them herbal pastries that healed the wounded and the sick, and also came to the aid of a young soldier who, having failed to save his lover from capture by the invaders, prayed to the moon. The Jade Rabbit turned an orchid patch into gold. The young man sold this gold and was able to pay his lover’s ransom.

Another association comes from the famous 5th/6th century folk song, The Ballad of Mulan, which ends with the following:

The he‐hare’s feet go hop and skip,
The she‐hare’s eyes are muddled and fuddled.
Two hares running side by side close to the ground,
How can they tell if I am he or she? * 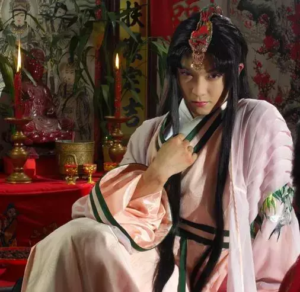 The tradition of Qi Xiong Di, where men who are unrelated make a pact to become sworn brothers, has evolved a branch that marks the discrete ceremonial union between homosexual men. Although he seems to fall short on coming to the aid of lesbians, Tu Er Shen has often been referred to as the Yue Lao (see my book) for homosexuals. Today, Tu Er Shen still enjoys significant popularity in south-east Asia and in Taiwan, which released the hit TV series on the said deity in 2010, “The Matchmaker Rabbit God”.

Earlier this year, you may have seen The Moon Is Warmer Than the Sun, performance art by Whiskey Chow, London-based Chinese drag king, which explores contemporary queerness and ancient mythology. And look out for Andrew Thomas Huang’s captivating film, Kiss of the Rabbit God.