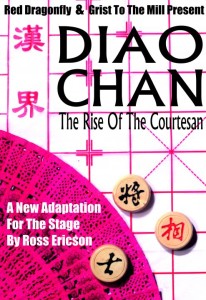 I first heard of Red Dragonfly Production last year when they toured the UK with “Autumn of Han”. I was delighted to find a theatre company bringing dramatisations of Chinese stories to the stage. Unfortunately busy schedules meant I missed the show, so it was with great anticipation that I attended the press night for their new play, “DiaoChan: the Rise of the Courtesan”.

Diao Chan was one of the non historical characters in  Luo Guanzhong’s timeless classic “San Guo Yan Yi”, (“The Romance of the Three Kingdoms”). Based on the end of the Han Dynasty and the war-torn “Three Kingdoms” era, it shows Dong Zhuo’s overthrow of the Han  Emperor, in favour of a young boy of royal descent, allowing him to rule de facto as Chancellor. The tyrant’s rule is absolute, maintained by both his puppet emperor, his protection by the powerful warrior and adopted son Lü Bu.

Wang Yun, a loyal minister to the Han court, hatches a honey trap, using his young courtesan Diao Chan, to save the Han court, having her seduce both Dong and Lü, and turning them against each other.  Diao Chan was also well known from the Yuan Dynasty drama “The Chain Stratagem”.

Growing up in a Chinese household in Britain that was trying hard for me to retain the culture of my roots, I was dosed with stories of Three Kingdoms, like all the children in China. I was particularly interested in the stories of Sun Shangxiang and Diao Chan, as stories about women from this era were so few and far between.

Diao Chan is traditionally known for her beauty and her self-sacrifice, and since the 1930s, a film on her story has been made pretty much every decade, including a version starring Linda Lin from Shaw Brothers Studios in 1958. With the rise of TV, her on-screen appearance became even more frequent. Despite the character’s popularity, Diao Chan is predominately represented as a pawn in a political coup, rather than a character of any agency, However, Red Dragonfly’s production has delivered the more modern and active take on her, that makes her more aceptable to a more enlightened audience. 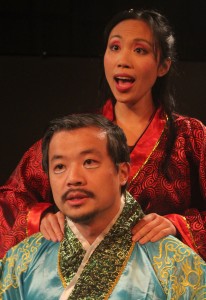 Here, DiaoChan (Michelle Yim) is not only a beautiful singing girl skilled in the art of seduction, but highly intelligent, with a cynicism, wit and perceptiveness that cut as keenly as any man’s sword. This becomes clear as soon as she appears on stage with Wang Yun’s daughter, Jingwei (Siu-See Hung), who she beats at chess, (the chessboard returns repeatedly throughout the play as a standard trope of DiaoChan’s strategic schemings). Jingwei is depicted as a  conventional girl with conventional aspirations, setting DiaoChan’s exceptional position in stark relief. She clearly doesn’t fit the mould, exhibiting a very clear understanding of the patriarchy in which she lives and the position of women, who must be “accustomed to defeat”. She is however, aware of her own power in sex and manipulation, taking great pleasure in arguing against the labels of whore, witch, and bitch.

As a courtesan in Wang’s household, she calls him “master” but as the characters interact, it is highly debatable who is the actual “master” in the relationship. As a singing girl who “hears the whispers of the world” she is as well informed as she is intelligent, and easily uses Wang’s fear and exacerbation to manipulate him into complying with her schemes – sending her to Lü Bu and Dong Zhuo as Jingwei’s maid, all under the guise of protecting Wang’s daughter, but obviously with self preservation and social climbing in her motives. 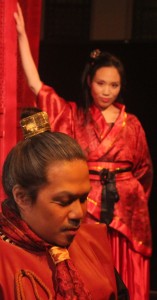 DiaoChan’s opportunistic nature, and guile should make her thouroughly unlikeable, but Michelle Yim delivers a highly charged and energized performance throughout, actively drawing in the audience on occasion, with cheeky expressions of complicity. Yim’s performance borders on the manic, but it’s an energy that propels her through multiple costume changes, dance routines, and near constant stage presence, trying to represent a whole gamut of interactions from near carry-on bawdiness to careful tiptoeing around other women.

The other women here, being entirely played by Siu-See Hung, who demonstrates her versatility between both the unworldly Jingwei and Dong Zhuo’s mother, the latter played with a gruff northern accent that translates across a level of  sharpness and indomitability, evidently inherited by her son. This matriarch is wholly an invention of this production, but aids the exploration the role of women in ancient China, implying that there were perhaps more Diao Chans than we knew, and that despite the shackles imposed on them, women were not as helpless as they have been presented to be.

The casting of the statuesque Arthur Lee, who does indeed resembles a Terracotta warrior in his armoured costume, as Lü Bu, was a fantastic choice. A character known simultaneously for his prowess in battle and simple outlook, Lee manages to depict a fierce warrior, who turns into a bumbling idiot when tied up in DiaoChan’s whims. Their interactions are heavily influenced by Richard Curtis RomComs, and watching this very imposing figure crumpling into a tonguetied lovelorn puppy is a most adorable deconstruction. His romance with DiaoChan is one of pure love and chivalry, whilst her relationship with the tyrant Dong Zhuo is one of lascivious smut and bratty behaviour, each tinged with a disdain for the other partner, presenting them as a prospective enemy.

Angelo Paragoso takes on the role of Dong Zhuo very well, keeping a level of cruelty running throughout. He serves double duty, returning to the stage as the general Cao Cao later in the play, and whilst I understand the concept of playing to hyperbolye to differentiate characters, this presentation of the great villain of the Three Kingdoms era borders on the camp.

The stage design consists of little more than a few Chinese screens and a low table for the Chinese chess board, but the constant wheeling around of these gave a great sense of layers, labyrinths, and also gave actors a little hiding space whilst corpses were whipped away. The choreography of this seemed a little unfinished, with screens shuffling across the stage, only to return, escorting the actors off stage, rather than the blur of movement in which scenes are reset, which I feel was the intended effect.

The costumes seem to be have been bulk ordered from Ali Express, but between the newness of the company, and the rigours of rapid costume changes, I’m willing to cut them some slack on that, though I have to say, the poor actors throwing themselves around in the hotbox of a theatre, under multiple layers of polyester, did admirably, and their beaded brows by performance end definately brought to mind the heat of the middle kingdom. 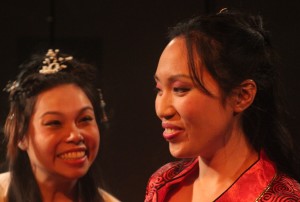 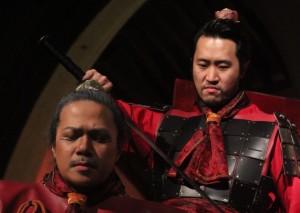 The production does its best with small resourses ad a cast of six,  but in the attempt to capture larger battle scenes, those limitations are made far too obvious.  The script flits between natural speech, falling into modern slang, at points,  rhyming couplets and peculiar word order, which could only be called cod-shakespearean. Whilst most of these are limited to soliloquy, there are moments where the script leaps from East Enders to Duchess of Malfi and back again with very little provocation.

As a writer on, and exponent of Chinese culture, I strongly support Chinese theatre in the UK, and would always want to shower every great piece I see with praise, but here, the goals are not clear. Is this elevation meant to show a historic context? Is it meant to lend worthiness to the production?  Whilst the Shakespearianisation helps Western audiences to place the story historically, giving them some familiar context for something new in content, I cannot help but think that the borrowed rhetoric also pre-programmes audiences responses. As the theatre emptied, we heard the play referred to as “the Chinese Macbeth” three times, and as a “Chinese Hamlet” by a fourth member of the audience. a Craven Herald reviewer also compares it to “Wolf Hall” and “Shogun”.

I personally would like to see Chinese works presented as works in their own right, and whilst these are the classic cornerstones of Chinese literature, for those presenting them, to enjoy presenting them as new and unique to a fresh audience.  The depiction of the “Three Kingdoms” period and its amazing array of characters, brings with it so much scope to explore those styles of writing that are more native to classical Chinese poetry and verse forms.

“DiaoChan: the Rise of the Courtesan”, is without doubt, an invaluable contribution to the cannon of works on the character, introducing her to new audiences in the West, and evolving her, which is key to keeping characters alive in the popular consciousness. The play has been produced with swathes of consideration, unique flair, and innovative approaches. The great humour, and an enthusiastic, dedicated cast, do make it a joy to watch. “DiaoChan” is the second in Red Dragonfly’s three-year Chinese Classics Programme, which concludes with a piece based on “Journey to the West”.