The 1st of October is modern China’s National Day. On this day in 1949, the country had gained its independence, and the Civil War had come to an end. Nowadays, most people around the world associate this occasion with Golden Week, one of the few times of the year when China takes a break. Another connection that people have with the founding of the PRC, is the xuanchuanhua, Chinese propaganda art, now iconic around the world. However, this art style would never have existed without the decades of commercial development that preceded it. On this national day, I’m taking a look at at the 月份牌 yuefenpai, calendar posters, an art form centred around early 20th century Shanghai.

It all started in the 19th century, when treaties during the Opium War forced Chinese markets open to foreign goods. Chinese customers, who didn’t have the same fascination with foreign products they do today, were unimpressed with pictures of imperial worthies and exotic colonial locations that were customarily given away as gifts of thanks by Western companies. This eventually prompted tobacco companies and drug stores to produce artistic pictures inspired by traditional Chinese art, such as Kitchen God posters, in the form of block-printed posters featuring images of such figures, together an almanac.

Subjects that appealed to rural inhabitants quickly gave way by urban scenery, and the almanac function transformed into one of aesthetic pleasures, with discrete images of products at the bottom of the picture. Artist Wu Youru played a key role in turning the art of nianhua (New Year pictures), into yuefenpai. The first ever calendar poster was “Shanghai Scenery and Fortune” printed by Shanghai Hongfulai Philippine Lottery Company in 1896. It combined Chinese line drawings with Western perspective. Its success led to a mushrooming of calendar poster production.

During the next forty years or so, the yuefenpai thrived in a very nourishing environment of artistic freedom and innovation, fuelled by trade and commerce. Artists who began their careers working for pictorials and newspaper presses, set up their own studios and were snapped up by merchant companies in healthy competition with each other to find the best ways of attracting customers to their products. Chinese women, who emerged from the home into society, in the wake of anti-feudalist reforms, and the founding of schools for women, became the muses for this art form. Calendar posters can be considered in three broad categories. 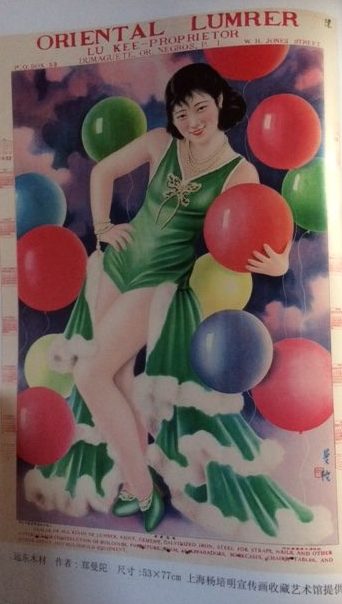 Around the 1900s, Chinese society was still at the beginning of its emergence from tradition into modernity. Prints of classical paintings from the Song, Ming and Qing imperial eras were still the go-to subject matter for domestic companies who wanted to hawk their wares. Zhou Muqiao (Dianshi Studios, Feiyingge Pictorial), one of the earliest renown creators of the yuefenpai, painted women in traditional dress on silk canvas, as figures from classical novels. Applying richer colours, Wester perspectives to Chinese painting techniques, Zhou made his figures come alive by observing the postures and stances of actors at live performances of Peking Operas and Suzhou Pingtan.

It was really Hangzhou artist Zheng Mantuo (Erwo Photo Studios) who created the unique art style of the calendar poster. The Tanfen Cabi Fa (碳粉擦笔法), now a signature of this art form, involves light lines, charcoal stumping and the application of water colours by layers, to give the skin a moist, vivid and life-like effect.

The massive appeal of Zheng’s work lay in the contemporary relevance of his subject matter. He painted women in fashionable 20th century dress, and even carried out market research with the celebrities at the pleasure gardens of Shanghai. His “Autumn Water in a Silvery Pond” and “Evening Makeup” featuring a simply dressed female student, originally painted for a drugstore, enjoyed high popularity when circulated in print. An artist of prolific output for both Shandong and Ta Chong tobacco companies, Zheng’s success propelled the yuefenpai into the commercial and industrial arena.

One of the most unique talents in calendar poster art is Xie Zhiguang, a student of Zhou Muqiao, who not only integrated Western portrait, sketch and water colour techniques with Chinese ink-wash paintings, but was well-versed in painting stage sets, and could capture the inner feelings of his subjects. The result was yuefenpai with beautiful backdrops and highly realistic figures whose emotions leap out of the painting. Xie was the reason Hwa Ching’s Beauty Cigarettes became one of the best-known brands in China at the time. 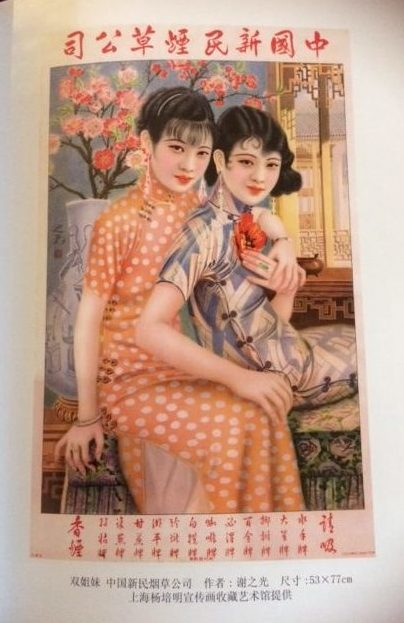 With the economic development and impact of social changes in the 1920s and 30s, the fashionable image of the innocent young female student was transforming into the mature urban woman in cheongsam. The artist that captured this in calendar posters, was Hang Zhiying (Shanghai Commercial Press), a highly skilled and innovative artist who studied female pedestrians, film stars in the city, and images of women in magazines. After Hang set up his own workspace, the image of the New Woman, tall and slender in a cheongsam, surrounded by exotic decorative objects, became the hallmark of Zhiying Studios, whose clients included Two Sisters Cologne, Yashuang Facial Cream, White Cat floral prints and Apricot Pavilion moon cakes.

Although calendar posters lost their calendar function early in their development, they had retained their original name. This name is a good reminder that all this beauty, innovation and enterprise grew out of the need for diversity of content.

The commercial nature of yuefenpai art gave it a flexibility that made it suitable for being adapted into propaganda art for the Resistance during the Occupation. Its bright colours and wide appeal was borrowed again to reflect the optimism after the founding of New China, adding bold postures and striking poses of Revolution. Even today, original calendar posters are not only sought after globally, but replicated in ranges of vintage merchandise. Replica prints adorn venues, homes and media around the world, whether it’s a Lisa See novel, or the chic Chinese herbalist shop in London’s famous Camden Town. Many TCM products in China have kept their old branding, and the images of calendar girls still appear on tins of throat soothers sold at Seven Eleven. As late as the 1980s, Chinese film posters were still hand drawn, and on these bright and striking movie posters you can still find more than traces of yuefenpai art.