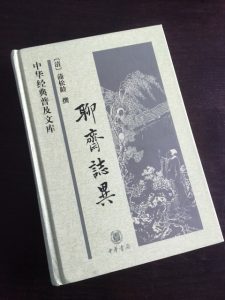 2014’s Zhongyuan or Ghost Month, took place in August, and Xiayuan was not until December. Nevertheless, with the crisp scent and keenness of the autumn air, I felt the delicious anticipation for All Hallow’s Eve. So I started a series on the Chinese horror genre. This was the first in the series, now with updates and revisions. It will focus on attitude towards the supernatural and the history of this kind of storytelling.

Early Chinese society revolved around shamanistic beliefs and rituals. The preeminence of Fangshu (a wide-scoping indigenous practice of sorcery that could be considered a predecessor of Daoist cultivation) during the Warring States (5th to 3rd century B.C.E.) led to a lot of popular legends about gods and immortals. The appearance of Daoism and introduction of Buddhism into China over the Eastern Han period (1st to 3rd century C.E.), and the sort of street-market witchcraft and fortunetelling we now see portrayed in historical C Dramas, generated a wealth of hearsay, folk tales of encounters with the supernatural that provided a rich resource for writers exploring the Lingyi (paranormal) in the centuries to follow.

During the Wei, Jin, Northern and Southern Dynasties compliers of these stories were either Buddhist preachers, like Yan Zhitui and his Records of Wronged Souls (Yuanhunji), and scholars. Some of them documented the wonders of the land into works such as Zhang Hua’s Records of Diverse Matters (Bowuzhi). Others just wanted to collect tales of the supernatural. The most popular of this last type include Cao Pi’s History of Strange Things (Lieyizhuan), Wang Jia‘s Tales of The Forgotten (Shiyiji) and In Search of the Supernatural by Bi Gan (Soushenji).

A zhiyi and zhiguai tales of the strange genres continued to evolve over the next millennium or so, absorbing influences from other literary forms such as the chuanqi legends, and culminated in 聊斋志异 (Liaozhai Zhiyi, “Strange Tales Told By the Hearth”), known in the West as “Strange Tales From a Chinese Studio”, the 18th century collection of ghost stories complied by the scholar Pu Songling.

Born during the Qing Dynasty into a poor gentry household, Pu Songling (Liuxian/ Jianchen), nickname Liuquan Jushi (Resident of Willow Springs) was a talented young scholar who failed the Kejü, but poured all his passion into his writing, whilst teaching to subsist a meagre living in his shabby rural cottage. He would go up to the local hilltop with a table, two stools, his writing materials and a pot of tea. To weary passers by he would offer a rest and a cup of tea, in exchange for a ghost story.

Liaozhai Zhiyi was the result of a decade of work, many revisions of the final manuscript derived from the stories Pu had collected, and a compilation several times the size of its Wei and Jin ancestors. Consisting of twelve books of individual tales that are often named after the main character in them, Pu’s arrangement preserves the sense that these were real life tales and legends that had been transcribed, rather than fabricated. They were, nevertheless,  immortalised under his brilliant authorship.

Pu Songling died in poverty, never knowing that his great work would one day, become almost synonymous with ghost stories and horror fiction to the Chinese, adapted on stage, page and screen for every generation, even inspiring very different kinds of storytelling, such as RPGs, around the world.

Next, I’ll be talking about the on-screen adaptations of Chinese horror.