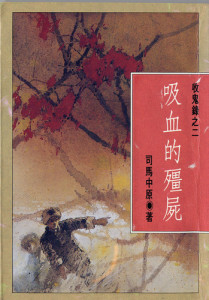 In honour of World Zombie Day 2014, I wrote about the China’s traditional monster of the undead, which I have revised and updated for Ghost Month 2021. You might know these are the “hopping vampires” (a misnomer that I shall address in this article). The proper name for them is Jiangshi, and in fact, they had lived in the Chinese fictional imagination for 900 years before the movies.

Jiangshi, 僵尸, means “stiff corpse”, a term that had existed in literature ever since the Han Dynasty, as early as Sima Qian’s Records of the Grand Historian, which described the aftermath of a battle ordered orchestrated by Qinshihuang (China’s first emperor), as “strewn with a thousand jiangshi”. At this time jiangshi was merely used to describe corpses.

As the undead, the jiangshi were most often portrayed in ancient tales of strange happenings in remote rural terrain, between the Song and the Qing eras (10th -19th century). Song writer Hong Mai’s book of strange tales told the story of a Daoist priest who gave an official named Liu Zi’Ang some spell tags, spotting an evil aura around his person. The official’s concubine severely reprimanded him for hanging them outside the door. Lured by her charms, he gave in.  When he saw Liu again, the priest was shocked by the state of his aura, and insisted on going to his house to sprinkle it with holy water. When they got there and tried to do so, the water could barely wet the floor. Opening up the floor boards, and found Liu’s concubine lying there in pristine condition, a jiangshi.

During the Ming and Qing periods, many parts of China were plagued by droughts. Out of anxiety and superstition, came the god of droughts, 旱魃 (Hanba) responsible for causing these disasters. We know now that lack of moisture would naturally slow down the rotting of corpses, but at the time, people who came across an un-rotten corpse when digging for water, believed it was an extremely ill omen and a manifestation of the Hanba.

The water disappearing properties of the Jiangshi had carried on evolving, even into 20th century in films like Lam Chingying’s Vampire v.s Vampire 1989, with dramatic effects of a storm starting just as a jiangshi is being dug out of long barren land.

Moreover, the ancient Chinese believed that the lack of decomposition of the body after death was due to strong, unresolved ties to the living world, especially deep grudges. Stories abound in sensational tales of the Song, Ming and Qing eras, of jiangshi coming back to the living world, disguised as a human, to tempt women with their burial jewels, intact corpses nailed to the walls of thousand-year-old abandoned houses; strange gusts of wind leading court officials to guilty monks and the location where they’d buried the corpses, and the jiangshi emerging from the grave to tell the tales of their murder.

More bizarre ancient beliefs include those of the famous poet Dong Yuandu, that corpses that are mutilated, as a form of corporal punishment on criminals who died before being convicted, would become jiangshi.  Intact corpses found by soldiers and grave robbers, were sometimes treated as an elixir to immortality, and carved up (literally) between them.

So what do the jiangshi look like? The Qing scholar Qi Xueqiu described them as “covered in white fur, with eyebrows and nails five to six inches long”. This is an image of the jiangshi that was propagated in the much more recent works of novelist Sima Zhongyuan.  The traditional jiangshi also had sharp teeth, which, coupled with Western influenced blood-sucking abilities of some Hong Kong movie zombies, is one reason why the West often mistake the jiangshi for vampires. The hairiness didn’t make it into the movies, which seemed to favour the hairless blue green complexion of the ghoul. They are, in fact, more similar to the zombie.

As the product of a culture so rich and experimental in the culinary arts, the jiangshi of course, did not miss out on the zombie delicacies. Some Mid-Qing era stories feature nocturnal encounters with brain-eating jiang-shi i in lonely graveyards and derelict temples. After piercing open the head with their sharp teeth, they would, in delicate Eastern fashion, suck out the brains of their victims, favouring children’s brains in particular.

The Jiangshi can be pretty powerful too, in the work of Manchurian writer He Bang E’, the pale skinned and red eyed female Jiangshi can control lightening with her handkerchief.  As a rule of thumb in Chinese horror, if you decided, for whatever reason, to go to an unkept graveyard or deserted monastery, alone, in the middle of the night, with no means of getting away quickly, the jiangshi would have it in for you.

So we can see that the jiangshi have some similarities to zombies, especially in their choice of provisions.They arose out of the ancient Chinese imagination through a mixture of climatic, survival and social anxieties and a desire for justice. Their ancient appearance sometimes bore more resemblance to actual aged corpses than zombies and their presence more intangible, intentions more mysterious.