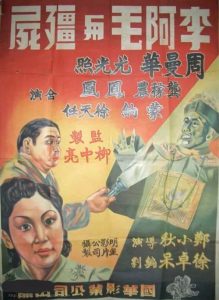 Continuing on with my series on Chinese Horror, I want to talk about Jiangshi (僵尸) films that have made them the overriding image of  the Chinese Supernatural.

The beginning of the 1980s saw the release of a wave of Hong Kong zombie movies featuring those blue green doleful Jiangshi, that hop around in Qing Dynasty official uniforms. These pioneers and the plethora of imitators, were mostly inspired by the legend of the Xiangxi Jiangshi handlers from Hunan.

West Hunan is home to the Zhangjiajie mountains. range, an embodiment of China’s gothic sublime. Its soaring, impossibly steep pillars, and many impenetrable parts have been the setting for many fantasy and horror stories throughout history. It was said the ganshiren 赶尸人 (corpse handlers), were skilled in the art of leading the walking dead through this mountain range, back to their homes, where they could be finally laid to rest. The standard method of transportation would consist of two handlers, at either end of the line of jiangshi, with the handler at the back holding a bowl of water. As long as the water was held upright, the jiangshi would stay standing.

The Jiang Shi would often be dressed up and disguised as living humans, to make them look more respectable, and to stop too many questions from being asked. This would have been one reason why so many Jiang Shi are portrayed in Hong Kong movies dressed in Qing official clothing. The smart outfits were the most uniform clothing to be found in the wardrobe department, owing to the popularity of Qing period dramas.

The Jiangshi’s hands would be tied and placed in front of them on bamboo poles, largely hidden under the wide sleeves of their traditional clothing, and the poles carried by the handlers at either ends of the retinue. These walking corpses never spoke, and walked in a peculiar way. We can see from here the origins of the postures of hopping Hong Kong movie zombies, and their out-stretched arms.

One of the early notable films based on these legends was The Case of Walking Corpses, (1957) directed by Wong Tin Lam, although the first jiangshi movie came out during the 1930s, Kung-Leong Yeung’s Midnight Vampire, the story of a man that murders by his own brother, who then returns as a jiangshi to take his revenge, and Three Thousand Year Old Vampire, in which the ancient corpse emerges from its grave to invade the living world with his army of jiangshi. From the English titles of these films, can be seen the beginnings of the confusion between jiangshi and vampires (which should actually be xixuegui in Chinese).

Jiangshi films of the 1950s such as Strange Tales at Midnight and Voyage of the Dead (also by Yeung) tended to feature not the supernatural, but people disguised as Jiangshi, in the best traditions of Scooby-Doo, in order to seek revenge, or embezzle a family inheritance.

By the 1980s, New Wave cinema had injected new energy and direction into the Chinese horror movie industry. Ann Hui’s The Spooky Bunch (1980) with its unique narrative perspective that challenged conventional relations between humans and ghosts, subsequently inspired Sammo Hung to make Encounters of the Spooky Kind for Golden Harvest later that same year.

Encounters combined the gory humour of Evil Dead, with innovative special effects, and excellent action choreography that was to become Hung’s trademark. Amongst the many monsters in the film, is a grey-blue jiangshi in Qing uniform, whose hopping allows him to fly through the air.

The cluster of jiangshi films were mutually inspiring, propelling the genre to greater heights. Just as Spooky Bunch inspired Encounters, Encounters had cast Ching Ying Lam as the Inspector, the type of role that would become his trademark speciality in subsequent jiangshi movies. Like Cushing in the Hammer vampire films, Lam is the brave, forthright and skilled jiangshi slayer, a role he would returned to many times, including taking the lead in Ricky Lau’s famous Mr Vampire (1985).

Mr Vampire was a revolutionary jiangshi classic in many ways. From its amalgamation of horror, kungfu and comedy genres, to the highly successful creation of what would become character archetypes in jiangshi films, the charismatic priest, his bumbling disciples and the spirited, Western-educated wealthy young “princess” who provides eye candy and contrast to the traditional setting.

After Encounters of the Spooky Kind and Mr Vampire, Jiang Shi movies flooded the market and diversified in style and content. The genre even evolved to stories from the Jiangshi’s viewpoint, as Ricky Lau’s masterpiece became a series. Mr Vampire II (1986) is a sort of Chinese take on The Munsters, featuring Jiangshi parents and their adorable zombie kids.

Towards the mid 1990s, the Hong Kong zombie film went into decline due to over-saturation and a lack of originality. However, with international horror movies from Japan and the West being very well received in China, the genre is being reanimated by films like Juno Mak’s Rigor Mortis (2013). Within mainland China, the Jiangshi has continued to fuel the Chinese imagination. In fact in Hunan today, tourists can now enjoy stage shows inspired by legend of the Xiangxi Jiangshi handlers.