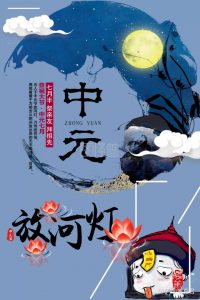 When I talk about Ghost Month, what comes up in your mind? Are you now thinking of Dias de los Muertos? You’ve got the right idea. This is the Chinese version.  There are three traditional festivals of the dead on the Chinese annual calendar, known in Daoist terms, as 上元 Shangyuan, 中元 Zhongyuan and 下元 Xiayuan. Shangyuan, or Qing Ming, the Chinese Remembrance Day, takes place on the 4th lunar month (see my other article). Zhongyuan, popularly known as 鬼节 (“Guijie”) or 鬼月 (“Guiyue”) Ghost Month, takes place on the 15th day of the 7th lunar month.

Chinese culture is a unique space where Buddhist and Daoist traditions stand side by side with Confucian principles. The Buddhist version of this festival is named after the Ullambana sutra, with which the Buddha instructed his disciple Maudgalyāyana to free his mother, who had been reborn into a lower realm.

Whereas the Buddhist tradition emphasizes filial piety, Daoist traditions centre around sending souls on their way. In Daoist beliefs, Zhongyuan is the birthday of Yenwang, Lord of the Underworld, who gives all his subordinates a day off. As no one guards the gates on this day, the souls of the dead return to their loved ones in the world of the living. It is this version of the festival, that has proven popular with the populace, throughout Chinese history.

Customs vary between regions, and there are multiple legends, but their main focus is on looking after the souls of dead. In the old days, businesses closed at the start of the Guiyue, tables with burning incense, fruits and meats, were set up on streets and in homes. Around these arrangements, Daoist monks sang to the souls of the dead, and stories from Buddhist teachings were performed.

It is believed that the souls of dead are attracted to water, lanterns in the shape of lotus flowers were made out of coloured paper, and set to float downstream, to guide the dead along their return to the underworld. Paper money would also be burnt for the dead to use along the way.

Ghost Month is not only celebrated in China, but in different guises throughout Asia, in countries like Japan, Korea and Vietnam. Unfortunately, due to being considered an “unhealthy superstition” during the Cultural Revolution, Guiye festivities came to an abrupt halt during the late 1960s, and its customs faded from popular memory. In recent years, the state has made considerable effort to revive and preserve Chinese heritage, and the rituals of Guiyue, have certainly adapted to the times.

Whilst traditional banquets for the dead are still set up, and the parades still take place, the Daoist songs and Buddhist performances have evolved into costume parties. Daoist inspired online RPGs launch on this day, while the demons of  games such as “Heroes of the Sacred Flame”, challenge you to during Zhongyuan. The artistically inclined post their Guiyue inspired artwork online, whilst the environmentally aware, seek the services of websites offering the burning of virtual paper money. Even though London is a long way to travel for the souls of my grandparents, I’ll be sending off lotus lanterns to light their way down the Regent’s Canal.